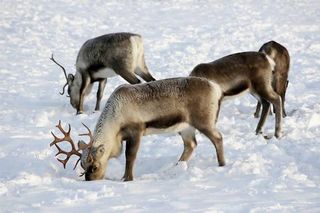 Most people know Rudolph the Red-Nosed Reindeer had a very shiny nose — but why? Medical researchers say they've now found the answer.

The secret to Rudolph's rosy schnozzle is the dense network of blood vessels in his nose. Reindeer, it seems, have 25 percent more capillaries carrying red, oxygen-rich blood in their nasal architecture than humans, say the scientists from the Erasmus Medical Center in Rotterdam, the Netherlands, and the University of Rochester in New York.

"In colder climates and also when they are higher up in the atmosphere pulling Santa's sleigh, the increase in blood flow in the nose will help keep the [nose's] surface warm," Dr. John Cullen of the University of Rochester told MedPage Today. The dense network of blood vessels in reindeer noses is also essential for regulating the animal's internal body temperature — like many mammals, reindeer don't sweat.

The researchers took advantage of high-tech instruments like hand-held intravital video microscopes to compare the blood vessels of two reindeer (Rangifer tarandus) with those of human volunteers (five healthy humans and one with nasal polyps). One of the human volunteers was examined after inhaling 0.0035 ounces (100 milligrams) of cocaine, "a drug routinely used in ear, nose, and throat medicine as a local anaesthetic and vasoconstrictor," the researchers write in the British Medical Journal this week.

"We're kind of glad they didn't do the same thing with the reindeer, because the last thing we would want is reindeer on cocaine, pulling Santa around the sky," said Cullen.

Their results showed reindeer noses do turn a rosy red; after a treadmill test, the reindeer's nose showed up as red (warm) in a thermographic image. In addition, they found glandlike structures in the nasal mucous membrane of reindeer and humans; the structures were surrounded by capillaries, and the researchers suspect, at least in humans, they secrete mucus.

"These results highlight the intrinsic physiological properties of Rudolph's legendary luminous red nose, which help to protect it from freezing during sleigh rides and to regulate the temperature of the reindeer's brain, factors essential for flying reindeer pulling Santa Claus' sleigh under extreme temperatures," they write.