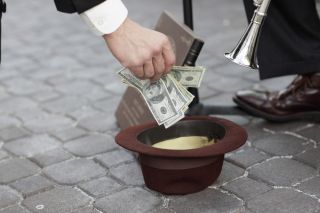 People may give to others in economic games not because of altruism, but because they don't understand how to maximize their payoffs, a new study suggests
(Image: © Felix Mizioznikov | Shutterstock.com)

People may not be as generous to strangers as social scientists previously believed, at least if a new study is any indication.

The findings, published today (Dec. 17) in the journal Proceedings of the National Academy of Sciences, may help explain a seemingly irrational behavior: People consistently give money to other people, even when it hurts their own bottom line in an economic game used by scientists to study cooperation.

Those findings suggested that people are naturally generous. But the new study suggests people may donate to the common pool not out of generosity, but because they simply don't understand how their actions will lead to payoffs down the line. The findings suggest these games aren't a great way to understand human generosity, said study author Maxwell Burton-Chellew, a zoologist at the University of Oxford.

"It gets at a big question about how much these economic games capture reality," Burton-Chellew said.

In the classic economic experiment called the public goods game, people are given some money, say $10, and have the option of putting some of it into a "public fund." Whatever they put into the pot gets multiplied and shared amongst all the players, including themselves, though depending on the multiplier, they wind up with less money than they started with. The most economically "rational" behavior in this instance would be to put zero dollars into the public fund, but in studies, people consistently put in some of their own money, leaving themselves worse off. [The 10 Things That Make Humans Special]

In the past, researchers have pointed to this behavior as evidence of people's natural propensity to help others.

In the new study, Burton-Chellew and colleagues asked 236 participants to play a standard public goods game. They then had half the participants play a different version of the game, where they were told explicitly how much other members of the group had donated and gotten back in turn.

When the payoffs were broken down, people became miserly and put less into the public fund.

Next, the researchers created a stripped-down, "black-box" version of the game where participants were simply told that they could contribute to a black box and get some non-negative amount of money in return, with the amount determined by a mathematical equation.

The players contributed about the same amount in the black-box version of the game as in the standard game. In other words, the people gave just as much when there was no notion of "public good" or generosity involved.

The findings suggest that altruism can't explain people's seemingly generous behavior in the public goods game. Instead, they may simply not understand how the payoffs work in these games and thus may be exploring many different strategies as they play, Burton-Chellow told LiveScience.

But the study doesn't rule out the idea that people follow social norms to be generous, only that knowing more about perfect strangers' donations doesn't change your own behavior, said Herbert Gitnis, an economist at the University of Massachusetts, who was not involved in the study.

But if people are told how their money will benefit society — for instance, by helping flood victims in Bangladesh — they will usually give more, he said.

By contrast, if the researchers said, "'If you donate, this person who is now in jail for rape and murder will get extra cigarettes or extra food rations,' nobody will contribute," Gitnis told LiveScience.