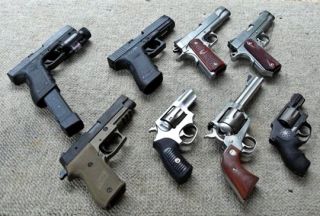 New York City Mayor Michael Bloomberg on Monday (Dec. 17) unveiled a national campaign to pressure President Barack Obama and lawmakers to take on gun violence in the next Congress.

Days after 20 children and six adults were killed in an "unspeakable" school shooting in Newtown, Conn., Bloomberg warned in a press conference that there would be a stain on the nation's legacy "if this moment passes into memory without action from Washington."

According to the Associated Press, Adam Lanza, the 20-year-old suspected shooter at Sandy Hook Elementary School, used a Bushmaster AR-15 rifle as his primary weapon. Police also reportedly found two pistols near Lanza's body after he killed himself.

The mayor outlined a three-prong plan to prevent guns from getting into the hands of the wrong people. First, he said lawmakers should take up the Fix Gun Checks Act of 2011, a bill that would close a private-sale loophole that currently allows 40 percent of all gun purchases to take place without a background check. [Infographic: Gun Ownership on the Rise in US]

Bloomberg also said lawmakers should pass a federal ban on assault weapons after an old one expired in 2004, in addition to a ban on high-capacity magazines.

"I think it should be illegal to have a weapon whose only purpose is to kill large numbers of people," Bloomberg said.

The third part of his proposal would make gun trafficking a felony.

Bloomberg, who endorsed Obama, said he would like to see all three steps included in any legislative package the president sends to Congress. He said politicians should be able to move swiftly on the issue, despite Washington's current preoccupation with averting the "fiscal cliff."

"If Congress and the president can't do two things at once, then who did we elect?" Bloomberg said.

Bloomberg rolled out a website, demandaplan.org, which is billed as a campaign of mayors against illegal guns and highlights two statistics — that 34 people are murdered with guns in the United States every day, and that this means 48,000 will be killed during Obama's next term. It also features videos of family members of victims of gun violence telling their stories and demanding action, including Lori Haas, whose daughter was shot and injured in the mass shooting at Virginia Tech on April 16, 2007, which left 32 dead. [How to Cope With Fear After School Shootings]

"My phone rang and I answered the phone and it was my daughter Emily and she said, 'Hi, Mommy. It's Emily. I've been shot.' ... Never, just never, never in a million years could I have imagined getting that phone call," Haas said. "It just made no sense. As we learned more and more about the details, it was confusing and disgusting frankly how this dangerously mentally ill person had such easy access to firearms."

The public seems to support some sort of gun-control bill being sent to Congress, as a petition for tightening restrictions on gun ownership placed onto a White House website just after news broke of the Sandy Hook mass shooting had garnered 144,000 signatures as of 11:40 a.m. today (Dec. 17), according to USA Today.

The powerful pro-gun National Rifle Association (NRA) has been quite quiet in the face of such calls for stricter gun laws. The group took down its Facebook page soon after the massacre, seemingly to prevent the site from becoming a battleground for the issue.