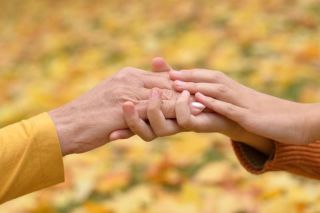 The brain chemical oxytocin can influence how selfish or giving a person is.
(Image: © Aletia | Shutterstock)

NEW YORK — Chemicals in your body can influence how generous or selfish you are, and, in recent years, experiments have explored the role of one called oxytocin — which one researcher calls the "moral molecule."

In an experiment known as the ultimatum game, one of two people is given a sum of money, say $100, and told he must decide how to split it with person No. 2. If person No. 2 is dissatisfied with the split, then she can reject it, but then the money vanishes, and neither person gets any.

Neuroeconomist Paul Zak and colleagues have performed many variations on this experiment. In one, they gave some participants a squirt of oxytocin to the nose beforehand, and found that the share of money they offered the other side increased by 80 percent. (It's important to note that the increase occurred when person No. 1 had to consider person No. 2's reaction to the offer.)

Zak's work indicates oxytocin — once best known as a hormone released during birth and breast-feeding — also plays a fundamental role in promoting social behavior, he told an audience at the New York Academy of Sciences on Tuesday (Dec. 11). Oxytocin also acts as a neurotransmitter, or messenger between brain cells. [11 Interesting Effects of Oxytocin]

His presentation was one of a series on the science behind the seven deadly sins, in this case, greed.

"The seven deadly sins are still deadly, because they separate us from other people," Zak said. "They are all about putting 'me' first and that is maladaptive for social creatures like us.'

Oxytocin, in particular, promotes empathy, and when the chemical is inhibited in someone, they become more prone to sinful, or selfish, behavior, he said.

But this system doesn't work for everyone.

Zak illustrated this using the example of a young Canadian woman, Stephanie Castagnier, who was a contestant on real-estate mogul Donald Trump's reality TV show "The Apprentice." Castagnier presented herself as "the goddess of greed," he writes in his book, "The Moral Molecule" (Dutton Adult, 2012).

Zak showed Castagnier a video depicting a 2-year-old boy who is dying of cancer. Not surprisingly, this video typically prompted a strong reaction. Zak found it prompted oxytocin levels to increase by an average of 47 percent in the blood of viewers. However, Castagnier's oxytocin increased only 9 percent.

"She doesn't have the physiology of empathy," Zak told the audience, adding that this allowed her to be more aggressive.

Zak and colleagues found that men given testosterone became 27 percent less generous toward others when playing the ultimatum game.

But in spite of this anti-social influence, testosterone does help maintain social order. In fact, people with high levels of testosterone are prone to want to punish those seen as uncooperative and greedy, even spending their own resources to do so, Zak has found.

Castagnier's personal history also offered a clue. Oxytocin is released as part of what Zak calls the "human oxytocin mediated empathy" circuit. Research on women who endured repeated sexual abuse as children indicates this circuit does not function properly for them, said Zak. The abuse they experienced seems to prevent this circuit from developing properly, he said.

In Castagnier's case, her father, who was a high-rolling drug dealer, became a homeless junkie when she was young. Before she had finished high school, both of her parents had died of AIDS, Zak writes in his book.

Based on his observations during a three-on-three paintball game, Zak surmised her greed was focused on money; she was capable of behaving cooperatively in other situations.

Other research is also exploring the complex effects of this chemical messenger, oxytocin, which has also been dubbed a "love drug."