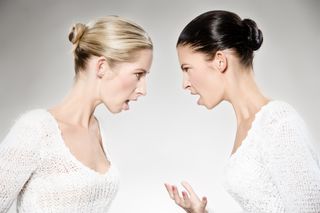 Women given testosterone then asked to collaborate with another woman made more self-centered choices, that weren't for the best of the group.
(Image: © yurok | Shutterstock)

When working as a group, women who have high testosterone in their systems reach decisions that are more selfish, new research suggests.

While working in a group — such as a trial jury — can be tough, it usually means reaching a better decision than any individual would make. The researchers found, however, that groups of women given testosterone were less productive than those who weren't hormoned up.

"In the placebo trial, there was a big benefit to making your decision in the group; the group made better decision than the individuals. When given testosterone, that was markedly reduced," study researcher Nicholas Wright, of the University College London in the United Kingdom, told LiveScience.

This self-interest isn't all bad, because groups can be as problematic as they are helpful. "Groupthink" happens when individuals in a group lose the ability to think independently. In group environments, individuals are also more likely to be used or ignored by others. In these cases, individuals who are more self-focused avoid negative group effects.

"You have these groups that are highly cohesive and don't tolerate individuals deviating from the group's ideas. Maybe in those cases the ability to stick with your own opinions might be important," Wright said.

In instances such as a jury considering a verdict, collaborating results in a better decision. "If too many individuals are trying to be the dominant individual, they may miss out on the benefits of collaboration and miss out on important insights from other group members," Wright said.

In the study, 17 pairs of women, average age 21, were tested twice: once after being given a placebo and once several hours after taking 80 milligrams of testosterone. The hormone levels used in the study were above those normally found in females, but about the right testosterone level for a man. The researchers said they used women because giving testosterone to healthy men would mess up their natural hormone balance, muddying the results of the experiment.

After receiving the testosterone, each pair of women played a computer game in which they had to decide whether one image was brighter or darker than another. If the pair disagreed, they had to talk it out, and one had to input a decision into the computer for the both of them.

When the researchers analyzed the differences in how the women performed on the two days, they found a definite advantage in the group decision-making process in the absence of extra testosterone. (What they didn't find was a difference in each individual's own ability to get the right answer; they did just as well when they were on their own whether they had the hormone in their blood or not.)

When testosterone was given, the hormone disrupted the two women's ability to work together and come to a mutual decision, Wright said. Often one woman stood by her answer and entered it into the computer, the researchers said. This was "egocentric" behavior, focused on the self.

Other effects of higher testosterone levels in females have been found (even within the normal hormone range), including antisocial behavior in female prisoners, aggressiveness, and decreased ability to trust.

Dana Carney, a researcher from the University of California, Berkeley, who wasn't involved in the study, said the paper was interesting and important. It "makes a lot of sense given what we know about the manner in which testosterone impacts brain and cognitive functioning," she said.

The study will be published tomorrow (Feb. 1) in the journal Proceedings of the Royal Society B: Biological Sciences.