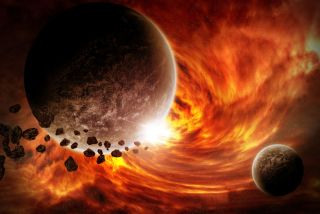 With doomsday rumors making the rounds online and likely at the water cooler, those who aren't in the know — that a Mayan apocalypse on Dec. 21 has no scientific basis — may be understandably freaked out.

That group would include kids, who often can't distinguish TV advertisements from their favorite animated shows. That's where the U.S. government comes in. Kids.gov, a government website, is taking a stand on the side of reason — for kids' sake.

"It is up to us to reassure kids that the world is not ending and that nothing bad is going to happen," according to the site. "To be able to talk to your kids with confidence, it is important to understand what the rumors are and why they are not true."

The site follows with four tips to help parents and other caregivers help alleviate kids' fears about doomsday rumors (whether they be from the end of the Mayan Long Count calendar or so-called "rogue planet" Planet Nibiru):

Take their fears seriously: Suggesting to your children that their fears are silly and dismissing them will not help. Sit down and discuss the fear with them, making sure to take it seriously.

Educate yourself about the topic of their fears: Knowing the facts will only help to calm them. If their fear is the Mayan apocalypse, here are some things to know: The rumors stem from the Mayan Long Count calendar, one of three used by the ancient Maya of Central America. On Dec. 21, today's calendar coincides with the end of the b'ak'tun, or the 144,000-day cycle on the Mayan calendar. There is no reason to believe the calendar would not just start over, and experts point out the ancient Maya did not see the end of the b'ak'tun as a sign of the end of the world. [Oops! 11 Failed Doomsday Predictions]

Furthermore, two ancient calendar carvings that reference this date do not point to any doom. One found in Tortuguero, Mexico, dates to A.D. 669 and mentions the return of a deity associated with calendar changes on that day. The second carving was found in Guatemala and dates to about A.D. 696; in that text, a struggling king attempts to bolster his rule by linking it to the 13th b'ak'tun.

Take the fear off their plate: "For younger children, sit down to discuss the child's fear and then tell them, 'Okay, from now on I will worry about this for you. You don't have to worry about this anymore. I’ll look into it and I will let you know what I find out,'" according to the government website.

The doomsday post by the U.S. government is not a first. In recent weeks, the U.S. space agency NASA, the Vatican and even the Australian Prime Minister (by way of a spoof video), have urged calm and affirmed the fact that the world won't end.

The latest from NASA was a video released ahead of the Dec. 21, 2012 alleged Mayan apocalypse to say the world didn't end "yesterday." The idea, according to NASA, is that the agency is so sure the apocalypse is a farce, they're willing to call it a week in advance.

"While many pundits and prognosticators lament the supposed end of the world on December 21, 2012 (thanks to misinterpreting Mayan predictions), here at the ASP we encourage everyone to go in the opposite – and accurate – direction," the statement read. "Thus, we are declaring December 12, 2012 as Anti-Doomsday Day in celebration of rational thinking and reasoned discourse."