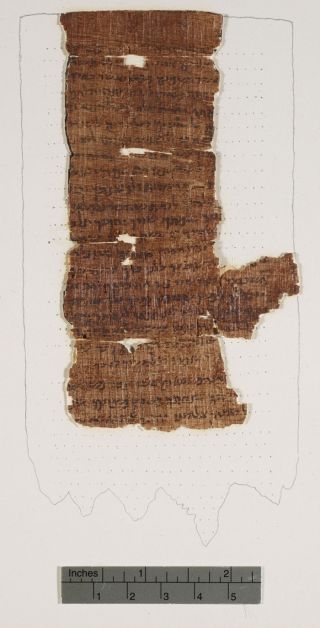 The "Nash Papyrus," which contains the text of the Ten Commandments.
(Image: © Cambridge University Library)

The Cambridge Digital Library has just made available thousands of pages from fragile religious manuscripts for Internet users' perusal, including a 2,000-year-old copy of the 10 Commandments, known as the "Nash Papyrus."

Before the Dead Sea Scrolls were found by a Bedouin shepherd in 1947, the "Nash Papyrus," also called "The Ten Commandments," was the oldest known manuscript containing a text from the Hebrew Bible. It gets its name from the Egyptologist Walter Llewellyn Nash who purchased the manuscript from an antiquities dealer in 1902.

The text is among several important religious documents that were made public in a series of high-quality zoom-friendly images by the Cambridge Digital Library, which draws on the British university's vast collection of manuscripts. [See Images of the Religious Texts]

"Because of their age and delicacy these manuscripts are seldom able to be viewed — and when they are displayed, we can only show one or two pages," university librarian Anne Jarvis said in a statement. "Now, through the generosity of the Polonsky Foundation, anyone with a connection to the Internet can select a work of interest, turn to any page of the manuscript, and explore it in extraordinary detail."

Leonard Polonsky, whose foundation has funded the project, added that he was "delighted to see such important materials being made freely available to the world."

Other texts posted include an ancient copy of the New Testament, called the "Codex Bezae," which contains all four Gospels (though the only complete one is the Gospel of Luke) and the Acts of the Apostles in both Greek and Latin. The Codex Bezae, thought to date from the late fourth or early fifth century, includes the oldest copy of the story of the adulterous woman (John 7.53-8.11). The phrase "let him who is without sin, cast the first stone" comes from that story.

The "Book of Deer" was also made available online. This pocket gospel book is about 6.2 inches (16 centimeters) tall and 4.3 inches (11 cm) wide and is generally dated to the first half of the 10th century. Its name comes from additions that were made to the text in Gaelic or Middle Irish, likely by someone in Deer in Aberdeenshire.

The digital collection also contains several thousand items from the world's largest set of medieval Jewish manuscripts. Called the Taylor-Schechter Cairo Genizah Collection, the manuscript fragments were found in a storeroom in Egypt in the late 1890s and detail life in the Jewish community at Fustat, near Cairo.

Beyond texts with Jewish or Judeo-Christian significance, the online collection includes several very early fragments of the Quran, from the eigth or ninth centuries, and Sanskrit manuscripts covering all the major religious traditions of South Asia.

You can explore some of the library's ancient texts here: http://cudl.lib.cam.ac.uk/.