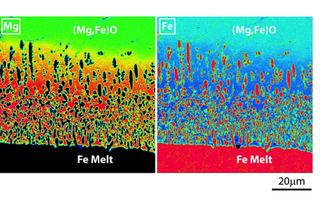 Mapping of magnesium concentration (left panels) and iron concentration (right panels) in molten iron and solid magnesium-iron oxide in an experiment meant to mimic how iron from Earth's core may be seeping into its mantle.
(Image: © K. Otsuka and S. Karato)

Metallic blobs that rise from Earth's core might help explain the mysterious innards of other planets, new research suggests.

Under the outer crust of the Earth sits the rocky mantle layer and then the planet's metallic, iron-dominated core. Scientists can probe these layers indirectly by measuring how the speed of seismic waves and electrical signals change as they zip through them. Analysis of the lowermost mantle in past studies revealed areas of high electrical conductivity (meaning that electric signals travel very easily) and low seismic velocity, suggesting that iron from the outer core was penetrating the mantle.

Now a phenomenon discovered by accident and described in the new study in the Dec. 13 issue of the journal Naturereveals that blobs of iron-rich liquid from the outermost core might have, over the history of the Earth, led to a metal-rich layer up to 60 miles (100 kilometers) thick in the Earth's lower mantle.

"This work showed that there is a very efficient chemical interaction between the rocky part and the iron-rich part of Earth and other planets," said researcher Shun-ichiro Karato, a geophysicist at Yale University.

Karato's student Kazuhiko Otsuka came to Karato saying that an experiment did not go well — the metal jacket in which his rock sample was enclosed melted by accident.

"I inspected his sample to see what happened and discovered that molten iron penetrated into the whole sample much faster than I expected from the classic model," Karato told OurAmazingPlanet.

Further experiments mimicking this accidental finding brought molten iron in contact with crystals of magnesium-iron oxide at the high pressures and temperatures found at the core-mantle boundary. These revealed that after a few minutes, blobs of iron-rich liquid penetrated more than 100 micrometers — the average width of the human hair — into the crystals. The researchers suggest this infiltration is driven by how the concentration of iron oxide varies within the magnesium-iron oxide crystals. The more iron oxide there is in a crystal, the more iron moves in.

These findings might help explain dense layers thought to exist in the deep mantle of other planets, such as Mercury. However, magnesium-iron oxide is a minor component of the mantle of Earth and Mercury, so researchers are also looking at how other minerals might affect the migration of iron.