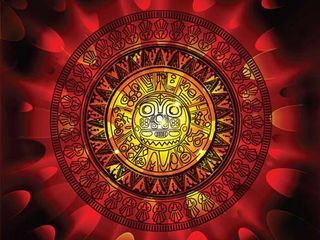 Some believe the end of the Mayan calendar, Dec. 21, 2012, will usher in a new spiritual era or even a doomsday. And new research suggests the civilization's demise long ago may have been partly their own doing.
(Image: © Morphart | Shutterstock)

A seemingly benign number that defines everything from a dozen eggs and the hours of day and night to the days of Christmas and the astrological signs, 12 may be in the spotlight today, 12/12/12.

This date structure, in which the same two-digit number gets repeated three times, won't happen again until next century, according to the Astronomical Society of the Pacific (ASP). And this is the last time the same number for the day, month and year (the last two digits, at least) will occur until Jan. 1, 2101 (01/01/01).

But does the triple dose of 12 hold any meaning? Depends on whom you ask, but in Hong Kong and Singapore, couples are crowding the aisles for a chance to tie the knot on a day they say symbolizes love, according to news outlets. Las Vegas is also abuzz with nuptials, according to CNN, which also reported an Indian numerologist saying today is a great day to start a new business venture. Making the rounds online, a boy who will turn 12 today at 12:12 p.m. in Bronxville, N.Y., suggests we're all a bit "number crazy."

Turning doomsday on its head, the ASP has coined today "Anti-Doomsday."

"While many pundits and prognosticators lament the supposed end of the world on December 21, 2012 (thanks to misinterpreting Mayan predictions), here at the ASP we encourage everyone to go in the opposite – and accurate – direction. Thus, we are declaring December 12, 2012 as Anti-Doomsday Day in celebration of rational thinking and reasoned discourse," according to an ASP statement. [End of the World? Top Doomsday Fears]

And if one were to tie any significance to today, and numerology in general, the ASP reminds us of plenty of auspicious associations with the number 12: the months in a year on contemporary calendars; 12 traditional zodiac signs; 12 Olympic gods and goddesses in Greek mythology; and 12 bottles of wine in a case. In Christian belief, Jesus had 12 apostles.

Then there's Mars, which is 12 light-minutes from the sun, and Jupiter, which takes 12 years to orbit the sun, according to the ASP.

The most recent triple-digit setup like today's occurred on Nov. 11, 2011 (11/11/11), another day some associated with Mayan doom. That day most likely became linked with Dec. 21, 2012, when believers noticed that the U.S. Naval Observatory had set the exact time of the 2012 winter solstice — when Earth's tilt is angled at its farthest from the sun — for 11:11 Universal Time on Dec. 21, John Hoopes, a scholar of Maya history at the University of Kansas, told LiveScience last year. (The Observatory now lists the official time for the winter solstice at 11:12 Universal Time.)

While the meaning behind numbers, called numerology, has yet to be grounded in science, humanity seems hard-wired to find such numerical associations.

"Cognitive scientists have demonstrated that our brains are hard-wired to look for meaningful patterns in the sensory data it collects from the world," said Alan Lenzi, professor of religious studies at University of the Pacific. "Numbers that are already significant to us, such as calendar dates, that also coincidentally fall into an obvious pattern become doubly significant," Lenzi told LiveScience in 2011, speaking about 1/11/11.

Lenzi added, "Given the propensity for people to look for significance in particular days and times (e.g. the "end of the world"), patterns are easily imbued with imaginative meaning," Lenzi said.

Editor's Note: This article was updated to change the year of the next triple-digit date.