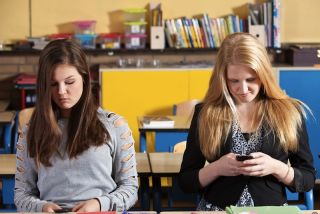 Cellphone use is ubiquitous, and new research shows it may be socially contagious, too. People are more likely to pull out their phones to check their text messages or email if they're with someone who has just done the same, the study found.

Researchers at the University of Michigan watched students in dining halls and coffee shops around campus between January and April 2011. They unobtrusively observed pairs of students sitting at tables for as long as 20 minutes and documented their cellphone use at 10-second intervals.

Overall, the students used their cellphones in an average of 24 percent of the intervals, the researchers found. But they were significantly more likely to use their phones (39.5 percent) when their companion had just done so in the previous 10-second interval than without the social cue, the researchers said, adding that this behavior was often repeated.

"Some of this could be people being primed to check their e-mail or phone messages, but this contagious use was happening several times in a 15-minute interaction," study researcher Daniel Kruger said in a statement. [The 10 Most Disruptive Technologies]

Kruger believes this pattern could be related to the effects of social inclusion and exclusion. If one person in a pair engages in an external conversation through their phone, his or her companion may feel excluded. That companion then might be compelled to connect with others externally so as not to feel left out.

The researchers note that they might not observe the same results in a study of different demographics — for example, in older adults, who may not use cellphones as habitually.

Their findings were detailed in the Human Ethology Bulletin earlier this year.