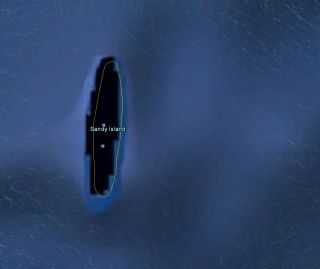 A Kiwi librarian may have discovered the origin of a nonexistent island that's been outfoxing cartographers for more than a century.

Sandy Island, still visible as a Manhattan-size void in the Coral Sea on Google Earth, was officially "undiscovered" last week after a group of Australian scientists gingerly navigated their research vessel directly through the spot where it should have been.

The researchers, who were on an expedition to study plate tectonics, decided to make a detour to Sandy Island after noticing that their ship's navigation charts made no mention of it, even though it showed up on both Google Earth and the world coastline database.

"We all had a good giggle at Google as we sailed through the island," Steven Micklethwaite, a scientist at the University of Western Australia who was on the voyage, told the Sydney Morning Herald. "Then we started compiling information about the seafloor, which we will send to the relevant authorities so that we can change the world map."

Shaun Higgins, an intrepid librarian at the Auckland Museum in New Zealand, caught wind of the story and started digging through the museum's map collection to try to find out when and where the island first entered the Western imagination, as detailed on the museum's blog.

The earliest mention of the island Higgins found was on a chart created by the Hydrographic Office of the British Admiralty in 1875 and last updated in 1908.

The chart, which can be seen on the museum's Flickr page, shows the same lens-shaped island west of New Caledonia that's depicted on Google Earth. The landmass was already called Sandy Island and was designated as the 1876 discovery of a ship named Velocity. [10 Strangest Sites on Google Earth]

But R.C. Carrington, the chart's author, warned seafarers that the document might not be completely accurate. A disclaimer on the sea chart reads: "Caution is necessary while navigating among the low lying islands of the Pacific Ocean. The general details have been collated from the voyages of various navigators extending over a long series of years. The relative position of many dangers may therefore not be exactly given."

It seems that future generations of cartographers may not have taken Carrington's words to heart, as the island has managed to carry on a fugitive existence in respected world maps and atlases for 136 years after its supposed discovery.

Some have speculated that Sandy Island may have been intentionally invented by a cartographer as a copyright trap; drawers of urban maps are known to add so-called "paper streets," which don't exist in reality, so that plagiarists will reveal themselves by the inclusion of a signature error.

But Mike Prince, the director of charting services for the Australian Hydrographic Service, told the Sydney Morning Herald that the authors of nautical charts didn't generally booby-trap their work, as such a practice could have had damning implications on sea maps' reliability.

The Australian scientists who sailed through Sandy Island seem poised to be remembered as its true undiscoverers. But just as North America was discovered by both Vikings and Native Americans before Christopher Columbus ever arrived, Sandy Island's existence was actually ruled out by a group of New Caledonian ham radio operators in 2000.

The hobbyists had been interested in the remoteness of the Chesterfield Islands, an archipelago a few hundred miles off of the New Caledonian mainland that was a candidate for a so-called DX-pedition, in which hams set up a communication point in an exotic and isolated locale. If Sandy Island had existed, the Chesterfield Islands would not have been sufficiently remote from another landmass to qualify as a viable DX-pedition destination.

But the radio explorers deduced from satellite data on ocean depths that Sandy Island was indeed an island of the mind, and in doing so, ushered in a brave new era of undiscovery.