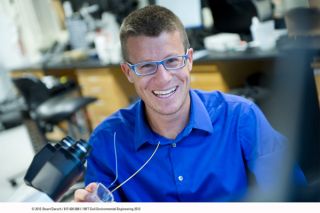 MIT environmental engineer Roman Stocker studies the interactions between the tiniest marine organisms, their fluid dynamical environment and their food sources. That work has conveyed understandings that shed light on global environmental processes.

A 2009 study of the micrometer-sized photosynthetic marine organisms called phytoplankton showed that the coupling of these cells' swimming behavior and ocean currents leads to the formation of intense layers of these creatures — which could be precursors of toxic algal blooms. Another study from Stocker's research group found that marine microorganisms are strongly attracted to sulfur compounds — the chemicals that give the sea its characteristic smell — and that this behavior could affect the chemical properties of the ocean and potentially influence global climate by altering cloud formation.

Most recently, Stocker showed that ocean turbulence directly affects the ability of marine bacteria to recycle organic material back into the food web, a process that can alter species composition and ecosystem productivity. Stocker's work at the interface of fluid mechanics and microbial ecology has also led to insights in other fields: by discovering that the chirality of bacterial flagella leads to drift relative to flow, a 2009 study from his group revealed a new method for separating "right-handed" from "left-handed" molecules that could have broad applications in chemical engineering. Stocker's most widely known research was inspired by his cat Cutta Cutta.

Watching him one day over breakfast, he began to think about just what is going on when a cat laps milk. High-speed videos showed that a cat's tidy lapping of water or milk is governed by the competition between liquid inertia and gravity. The news appeared everywhere from the front page of the New York Times to Le Monde to Jay Leno's opening bit.

It's really two fields! I got into fluid mechanics because I was fascinated by how water moves: the aesthetics of it, the mechanics of it, and its powerful consequences. Only later I realized that one of the coolest things in water is … life! And some of the most amazing, most diverse, and most important life forms are microbes. So now I work at the interface of fluid mechanics and microbial ecology.

'Be positive' (from my dad). He actually said it a bit differently — he said "Unless there is a strong reason not to, why not smile?" — but 'be positive' is what this meant for me. Certainly 'positive' can be a character trait, but I believe it is a trait one can strongly influence. I think about those words from 30 years ago pretty often … and they still successfully make me smile every time!

Trying to dam up little mountain creeks during summertime hikes, so as to build small pools in which to wade and splash. I found it intriguing how the water passed around, underneath and above the different materials I put in its way and this drove me to 'engineer' new obstacles, new components of my dam. Of course, it was a never-ending quest, for the water always found a way, but I now see that this was part of the fun!

Exploration. Which comes from freedom. Interrogating nature about its secrets, whether on a discovery trip or by peeking through a microscope. Doing it without constraints, primarily for the sake of understanding. And doing it in a team, where brainstorming sessions can become like detective work and the understanding one more of nature's secrets is a team victory.

Understanding the environment, and particularly the ocean, so that we as humans can prevent impacting it and, ultimately, hurting ourselves.

It's not a single person, it's a specific period in my education. I'm Italian and in Italy you can choose high schools with different areas of focus. I attended a humanistic gymnasium. It was a detour, for my strengths were more quantitative and eventually I studied engineering in college, but it was a most valuable detour, as it provided me with a background in literature, philosophy, ancient history, and a passion for writing and languages that — unexpectedly I must say — I have come to consider key strengths in my current work as a researcher. The ability to write a clear and broadly appealing scientific paper, craft a compelling grant proposal, prepare an intriguing lecture, all contain major components that go beyond the technical knowledge.

About my field: how "alive" the ocean is, even at its smallest scales. Go to the beach, scoop up a handful of water, ask how many microbes live in it. Few suspect that the answer numbers in the millions and how important those millions of microcritters are.

About being a researcher: how much persistence and rigor are needed. Some of our studies have taken 4+ years and have resulted in a 4-page paper. A year per page??

I would actually not worry too much. There are certainly some personal things — family pictures, a couple of drawings — that I am attached to, and others that it would take time and money to replace — all the equipment, some custom-made tools. But, ultimately, the most valuable resource is what we know and how we think: fortunately, those are not very flammable!

Italian songwriters ('cantautori'), in particular from 10-15 years ago. De Gregori is my favorite, but also Zucchero, Jovanotti, Dalla ... probably exotic-sounding names to a non-Italian reader! They've always had, for me, the right balance of poetry, tune and simplicity: a good balance to strive for!

Editor's Note:This research was supported by the National Science Foundation, the federal agency charged with funding basic research and education across all fields of science and engineering. Any opinions, findings, and conclusions or recommendations expressed in this material are those of the author and do not necessarily reflect the views of the National Science Foundation. See the ScienceLives archive.