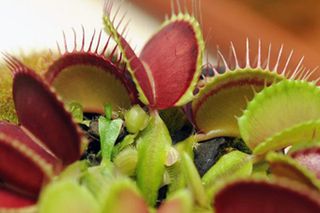 (ISNS) -- Plants aren't typically known for their speed, but the carnivorous Venus flytrap can close its jaw-like leaves in the blink of an eye. Charles Darwin once referred to the Venus flytrap as "one of the most wonderful plants in the world." But despite the plant's notoriety, its closing mechanism remains a mystery 250 years after its discovery.

Biophysicists at the Ecole Polytechnique Universitaire de Marseille, in France, are investigating the cellular process behind the Venus flytrap's rapid response to prey. The researchers have already thrown out one popular explanation for the Venus flytrap's quick motion, that water movement within the plant makes its jaw snap. They announced this finding in San Diego at a meeting of the American Physical Society's Division of Fluid Dynamics.

"This is the first time someone has looked at how Venus flytraps move on the cellular level," said biophysicist and lead researcher Mathieu Colombani. "We are looking for an explanation that's both biologically and physically possible."

Venus flytraps are native to the coastal bogs of North and South Carolina. The bogs' soil lacks the proper nutrients -- particularly nitrogen and phosphorus -- for plants to grow. The plant manages to survive in this tough environment by trapping and digesting insects in order to fulfill their nutritional needs.

"In these bogs you see a lot of carnivorous plants that rely on animals and insects for nutrients," said biophysicist Jacques Dumais of the Universidad Adolfo Ibanez in Chile.

When an insect is drawn into one of the plant's traps, it tickles a small, hair-like outgrowth on the inside of the leaf. When two different outgrowths are triggered in short succession, a rapid process triggers the leaves to shut, trapping the insect in as little as one-tenth of a second.

As the insect struggles to escape, it triggers even more outgrowths, causing the Venus flytrap to tighten its grip and release enzymes to digest its snack. Each "mouth" can only snap shut four or five times before it dies, whether it catches something or not.

In 2005, scientists discovered the large-scale principle behind the plant's bite. Each leaf pops from convex to concave as it closes, like a jumping popper toy or an inverted contact lens.

"A Venus flytrap is like two popper toys put together," said Colombani. "Once the process is started, the two leaves snap together very quickly."

"The Venus flytrap's movements are as much a biological process as a physical process," said Dumais. "Colombani's work is a really wonderful attempt to understand everything from beginning to end."

Currently there are several theories on how the Venus flytrap's leaves become unstable.

The researchers were able to rule out one popular theory, which suggests that cells on the inside of the plant's leaves transfer water to cells on the outside of the leaves. The resulting cell size change would alter the shape of the leaves, possibly causing them to quickly destabilize and pop together. Colombani's team looked at the pressure change inside a single cell as the leaves snapped shut.

"It's difficult because you need to stay focused on a single cell and the plant's leaves move very quickly," said Colombani.

To solve this problem, the researchers creatively used blue dental paste to glue one of the Venus flytrap's leaves to an anchored plastic fork. This setup kept the leaf from moving and made focusing on a single cell possible. They found that the movement of water between the inner and outer cells was far too slow to be responsible for the plant's rapid movements.

"It takes a few seconds for each cell to relax, which means that it would take about two minutes for the plant to close," said Colombani. "This doesn't seem like a good candidate for a mechanism that takes less than a second."

The researchers are currently testing another popular explanation that says the elasticity of the plant's cell walls changes, causing the leaves to destabilize and snap together. Colombani says that whatever the mechanisms behind the remarkable plant's bite are, they could have potential applications in medicine or other fields.

Thomas Sumner is a science writer based in Santa Cruz, Calif.