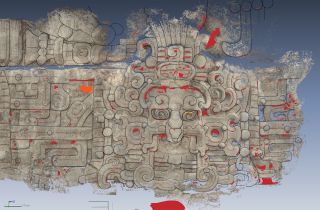 A tracing of an artistic representation of the Maya sun god found on the north side of the Diablo Pyramid at El Zotz, an archaeological site in Guatemala.
(Image: © Stephen Houston)

Citing fears that doomsday believers, curiosity seekers, and "above all" journalists will flood a French mountaintop on Dec. 21, the supposed day of the Mayan apocalypse, local officials are banning access to the mountain.

The spot, Pic de Bugarach, is rumored to be one of the only safe places on the planet on Dec. 21, according to Raw Story. On that date, a major cycle of the Maya Long Count calendar ends. The calendar is split into several chunks, including 400-year spans called b'ak'tuns. Dec. 21, 2012 on our calendar marks the end of the 13th b'ak'tun and the beginning of a new cycle.

The calendar change would not have been seen as the end of the world by the ancient Maya, scholars agree. But in New Age and other online subcultures, believers have come to expect something major on that day, with predictions ranging from a new dawn of peace and harmony to an explosive doomsday.

One online rumor holds that on this day of destruction, Pic de Bugarach will open up to reveal an alien spacecraft, which will save believers nearby. That has local officials worried. [End of the World? Top Doomsday Fears]

"We are expecting a few visionaries, a few people who believe in this end of the world, but in extremely limited numbers," state official Eric Freysselinard told Raw Story. "We are expecting greater numbers of people who are just curious, but in numbers we cannot determine. Above all, we are expecting lots of journalists."

In response, officials will call in 100 police and firefighters on Dec. 21 to seal off approaches to the mountain, Freysselinard told Raw Story.

Other areas are welcoming the doomsday attention. In Belize, the Chaa Creek resort is trying to lure tourists with a seven-day, all-inclusive "Maya Winter Solstice" package, which includes workshops on Maya crafts, traditional Maya garb and names of guests inscribed into a giant stele that will be erected on Dec. 21.

In Guatamala, the national tourism bureau is organizing all sorts of festivities, including a "New Dawn for Humanity" summit in Tikal, a major ancient Maya city. Elton John, Bruce Springsteen and U2 will provide entertainment.

Mexico is aiming for the action, too, launching a tourism campaign called "Mayan World 2012" and encouraging visitors to seek out sites in southern Mexico, where the ancient Maya once built complex cities. In Cancun, the National Institute of Anthropology and History has opened the enormous "Museo Maya de Cancun," a museum dedicated to Maya history.