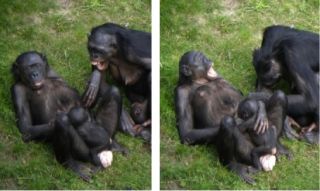 Like humans, bonobos yawn contagiously, but yawns are only infectious between close friends or kin.
(Image: © Elisa Demuru)

For bonobos, yawning is contagious, but only between friends.

Yawns spread more easily between family and close friends, and from high-status monkeys to those lower on the totem pole, according to a study published online today (Nov. 14) in the journal PLoS ONE. This pattern of social yawning mimics one found in humans and suggests infectious yawning is a byproduct of empathy, which coordinates emotions in a group.

"It underlines that the mechanism of yawn contagion in the two species is the same," said study co-author Elisabetta Palagi, a primate researcher at the University of Pisa in Italy. "One of the possible functions of yawn contagion is to synchronize individuals of a social group. In humans, yawn contagion is extremely important but just between people who share strong bonds."

Many animals spread yawns: Chimpanzees and baboons catch them from each other, dogs can catch yawns from their owners, and even parakeets yawn contagiously.

In humans and chimpanzees, contagious yawning follows social rules: People yawn if friends do, but not if a complete stranger does. Those who haven't mastered empathy, such as babies (of the human, canine and chimpanzee varieties) don't yawn infectiously, and neither do children with autism.

Because the infectiousness of yawning depends on social ties, scientists have argued it is a byproduct of empathy, or the ability to understand someone else's emotions, Palagi told LiveScience. The same mechanism may underlie other emotional contagions, such as infectious laughter and smiling.

To see whether bonobo yawns spread like human ones, Palagi and her colleague Elisa Demuru recorded 12 bonobos for three months as they groomed each other, had lots of sex, played, fought and made up at the Apenheul Primate Park in the Netherlands. During that time, adult monkeys yawned 1,260 times. Each time one of the apes opened its mouth to yawn, the team watched to see if another bonobo did so within three minutes.

As in humans, Palagi's team found that yawns were more infectious between close friends or kin, and between male and female bonobos. (They used food sharing and grooming behavior to determine which bonobos were best buddies).

Interestingly, yawns also spread from the top banana bonobo to those of lower status.

The findings support the idea that contagious yawning is a form of basic communication that relies on empathy.

To follow up, the team wants to see if yawns spread more easily depending on the relationship between apes — for instance, between mother and son. They also want to see if yawn quantity and quality affect their infectiousness, Palagi said.

"If you emit three or four yawns, are you more able to infect me compared to other people who just emit one?"