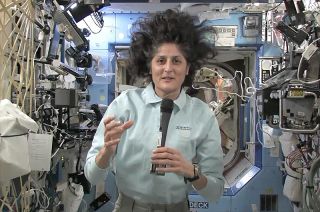 Expedition 33 commander Sunita "Suni" Williams takes part in an interview with collectSPACE.com from on board the International Space Station on Oct. 19, 2012.
(Image: © NASA TV)

Call it the ultimate absentee ballot. NASA astronauts aboard the International Space Station have the option of voting in tomorrow's (Nov. 6) presidential election from orbit, hundreds of miles above their nearest polling location.

Astronauts residing on the orbiting lab receive a digital version of their ballot, which is beamed up by Mission Control at the agency's Johnson Space Center (JSC) in Houston. Filled-out ballots find their way back down to Earth along the same path.

"They send it back to Mission Control," said NASA spokesman Jay Bolden of JSC. "It's a secure ballot that is then sent directly to the voting authorities."

This system was made possible by a 1997 bill passed by Texas legislators (nearly all NASA astronauts live in or around Houston). It was first used that same year by David Wolf, who happened to be aboard Russia's Mir space station at the time.

"You think about being in a foreign country and voting — he was actually on a foreign space station," Bolden told SPACE.com.

Wolf participated in a local election in 1997. The first American to vote in a presidential election from space was Leroy Chiao, who did it while commanding the International Space Station's Expedition 10 mission in 2004. (The first crew arrived at the $100 billion orbiting lab in November 2000.)

The station's current Expedition 33 counts two Americans among its six-person crew — commander Sunita Williams and flight engineer Kevin Ford. But both of them have already had their say in Tuesday's presidential election, voting from Earth just like the rest of us.

"They actually both did it while they were stationed in Russia, before they launched," Bolden said.

Williams and Ford both rode to orbit aboard Russian Soyuz spacecraft, which launch from Baikonur Cosmodrome in Kazakhstan. Williams blasted off in mid-July, while Ford launched Oct. 23.

Williams is slated to return to Earth on Nov. 12. When she departs, Ford will become commander of the new Expedition 34 mission, which runs through March 2013.