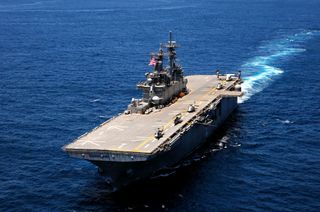 Three U.S. Navy warships bristling with helicopters and U.S. Marines headed for the coast of New York and New Jersey after Hurricane Sandy left a trail of destruction similar to some war-torn battlefields.

The USS Wasp, USS San Antonio and USS Carter Hall have spent the past several years testing the new F-35 fighter jet and fighting Somali pirates. But their latest mission is to head for the New York and New Jersey areas affected by the hurricane and wait for official orders in case any help is needed, according to Rear Admiral John Kirby, chief of information for the U.S. Navy.

Such humanitarian relief efforts make up a huge part of the U.S. military's unspoken mission, which involves helping out countries around the world in the aftermath of natural or manmade disasters. The Navy's services in particular are often called upon because it can rapidly deploy large amounts of people and supplies to stricken areas.

The biggest of the three Navy ships by far is the USS Wasp, an amphibious assault ship that resembles a small aircraft carrier. It can carry helicopters, the tilt-rotor V-22 Osprey, and vertical takeoff and landing (VTOL) aircraft such as the Harrier jump jet, as well as amphibious vehicles and landing craft used to put U.S. Marines ashore on both friendly and hostile beaches.

Before its Sandy-related mission, Wasp had been serving as a launch platform at sea for testing the carrier version of the F-35 Joint Strike Fighter designated as the next generation fighter jet for the U.S. Navy, Air Force and Marine Corps.

The second-largest ship, USS San Antonio, is an amphibious transport dock designed to carry troops into a war zone. It can carry either four helicopters or two Ospreys along with 800 Marines and their landing craft.

The third ship, USS Carter Hall, is a slightly smaller amphibious transport that can carry up to 500 Marines and their landing craft. It previously assisted humanitarian efforts in the aftermath of the devastating 2010 Haiti earthquake, and also pursued Somali pirates during a firefight in 2007.

USS Wasp was already at sea when Hurricane Sandy approached, but USS San Antonio and USS Carter Hall were among many Navy ships that left their Virginia bases to avoid the storm.

Editor's Note: Original news sources said that one of the ships deployed was the USS Mesa Verde. The U.S. Navy has clarified that it did not deploy the USS Mesa Verde, but has instead deployed a sister ship of the same class named the USS San Antonio.