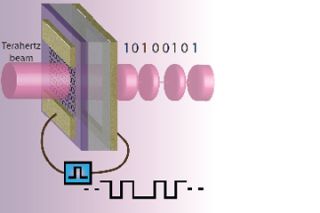 We seldom think about it, but electromagnetic waves are an integral part of our everyday life. On any given day, we employ cell phones, TVs, radios and microwave ovens to manipulate, generate and detect electromagnetic waves for the purpose of transmitting information or energy. Even our own bodies interact with these waves, when our eyes detect and process visible light.

Although all electromagnetic waves travel at the speed of light, or approximately 186,282 miles per second, the length and frequency of the wave determines its ultimate use. The longest waves, also known as radio waves, can travel far distances making them perfect for transmitting data to televisions, radios and cell phones. The next region of the spectrum is microwaves. These smaller waves carry information to satellites and weather radars, as well as impart energy via microwave ovens. The remaining electromagnetic spectrum consists of terahertz, infrared, visible and ultraviolet radiation as well as x-rays and gamma rays. As with radio and microwaves, these regions are continuously explored and researched for new device applications.

Until recently, the THz frequency range — located between the far infrared and the high frequency microwave bands — was one of the least exploited regions of the electromagnetic spectrum. With the ability to carry more information than its neighboring radio and microwave frequencies, THz waves have shown great potential for applications in healthcare screening, chemical sensing, object detection and high-speed wireless communications. However, most THz sources and devices used today are bulky and expensive, which limits their application and availability. The development of cheap, compact and efficient THz materials and devices would expand if not catalyze research on this region of the spectrum. The recent development of a new naturally-occurring and artificially-engineered material is closing this so-called "THz gap."

A research group led by Huili (Grace) Xing at the University of Notre Dame, with support from the National Science Foundation, has been actively developing graphene-based devices capable of efficiently manipulating THz waves. Graphene, an atom-thick sheet of bonded carbon atoms, can modulate or vary the properties of THz waves — making it an ideal choice for THz-based devices and systems. "Graphene is a miracle material for THz applications," says Xing. "This is owing to its two-dimensional nature, which leads to extraordinary electrical and optical properties, and ease of fabrication, which leads to unprecedented degrees of freedom in terms of device and system design."

Xing, her colleagues and students at the University of Notre Dame aim to develop cheap, compact and high-performance graphene-based THz systems such as cameras and high speed communication chips. "Understanding the interaction of graphene with THz waves is the key for developing these THz devices," Xing says. Her group relies on numerical simulations and theoretical calculations to engineer their devices before fabricating them in the laboratory.

The graphene-based THz devices proposed and developed by the group so far consist of a layer of graphene and another two-dimensional layer of electrons separated by a thin insulator. The graphene layer affects the properties of the waves passing through the material, while the insulating layer serves to create a nonconductive space between the graphene and second electron layer. By applying a voltage between these layers, the absorption of THz waves can be tuned from close to zero to almost 100 percent. "It is amazing that we can observe such a strong THz response, considering that graphene is an atom-thick material," says Berardi Sensale-Rodriguez, a graduate student in Xing's group. "This is a result of the high electrical conductivity achievable in graphene, together with the possibility of constructing device structures where the electric field is enhanced in the graphene layers," explains Xing.

In a recent article published about their work ("Broadband graphene terahertz modulators enabled by intraband transitions", Nature Communications, 2012), the group reported their development of an intrinsically broadband THz modulator based on graphene sheets. In other words, a device capable of modulating THz waves in a wide range of frequencies. This modulator revealed more than double the THz manipulation of prior broadband intensity modulators. It is also the first demonstration of a graphene-based device enabled solely by intraband transitions. By adjusting the layers or transitions within the graphene material, THz waves can be tuned and manipulated. Such efficient THz modulation can result in unprecedented performance when applied to devices.

This novel application of graphene paves the way for the development of compact, cost-effective and highly efficient THz devices based on graphene and related materials. In the near future, these materials and devices may provide our everyday lives with such advances as improved communication systems and safer, more highly defined medical imaging.