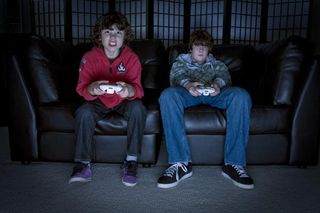 Kids like shooting things, but it can actually help them with aggression.
(Image: © Dreamstime)

If you can’t help children with anger problems through psychotherapy alone, try a video game.

In the "Space Invaders"-like game, kids shoot at enemy spaceships and leave friendly ones alone. During the study, children wore a monitor that tracked their heart rate and displayed it on screen. If their heart rate went above a certain level, they could no longer fire on the enemy ships.

Peter Ducharme, the study’s lead researcher, says that while shooting games are sometimes associated with problems such as increased aggression in youths, they chose to create this kind of game because the kids got more involved in them.

“These are games that are familiar and enjoyable to kids, and teaches kids how to stay in emotional control and avoid reacting impulsively, which is why we believe we see a reduction in anger,” Ducharme said in an email to TechNewsDaily.

Anger issues are one of the more common mental health disorders among teenagers. According to research from Harvard Medical School published in July 2012, nearly 8 percent of teens display regular violent outbursts.

In a study of two groups of youths ages 9 to 17, the group that played the game after receiving standard therapy for anger showed significant improvement at keeping their heart rate down compared to the group that received standard treatment alone.

[SEE ALSO: Logging In with Your Heartbeat]

The children who played games decreased anger scores in the intensity of anger at a particular time, the frequency of angry feelings over time and the expression of anger toward others or objects (such as swearing at or insulting people, or punching walls or breaking belongings).

Perhaps as important, the kids themselves found the experience helpful.

“Kids reported feeling better control of their emotions when encountering day-to- day frustrations on the unit," Ducharme said in a statement. "While this was a pilot study, and we weren't able to follow the kids after they were discharged, we think the game will help them control their emotions in other environments."

Other studies have shown that video games may help treat a variety of behavioral and psychological problems in children. A study in 2011 from East Carolina University’s Psychophysiology Lab and Biofeedback Clinic showed casual games can reduce depression and anxiety, while some additional studies have shown that fast-paced video games can be helpful to children with attention deficit hyperactivity disorder (ADHD) by increasing their ability to concentrate.

The research team at Boston Children’s Hospital, a teaching affiliate of Harvard Medical School, is working on future ways this concept can be easily translated and incorporated into other mainstream games, but these are not available yet. They are conducting a new clinical trial of the game that includes parents and children playing together. The team also plans a clinical trial that involves playing the game at home; current trials take place within the hospital.