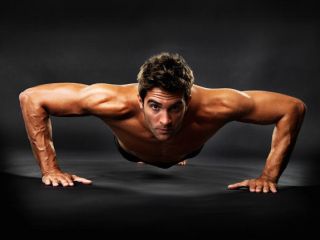 A report of a man who successfully had one testicle augmented with a chin implant is highlighting the growing number of guys who have genitalia-image issues.
(Image: © Yuri Arcurs, Shutterstock)

Men are finally catching up to women, at least when it comes to body-image issues.

For the first time, doctors in Mexico have used a silicone chin implant to give a man's testicles a more symmetrical look.

The new surgery is a safe way to boost the body image of the growing number of men who have issues with their genitalia, researchers say in the new study.

"We are starting to have the same kind of problems that the ladies have with body image," said urologist and lead author Fernando Ugarte of the National Autonomous University of Mexico. "There are many people who are probably not feeling satisfied with their testicular size, and now they have a new option."

The 45-year-old man was born with a tiny right testicle that never descended, a condition called cryptorchidism. The doctors in Mexico originally removed that testicle, which was not functional, and replaced it with the "largest implant on the market," Ugarte told LiveScience. [Macho Man: 10 Wild Facts About His Body]

But that left his other testicle looking meager in comparison.

The man was plagued by body-image issues and diagnosed with body dysmorphic disorder, a preoccupation with a specific physical defect more commonly seen in those with anorexia or bulimia, Ugarte said.

So to even out the pair, in 2011, Ugarte and his colleagues made a small incision in the man's groin and placed a silicone chin implant between the left testicle and several layers of tissue. Plastic surgeons frequently use this type of implant, a piece of silicone about a quarter of an inch thick (6 millimeters), to plump up the chin or the cheekbones.

The patient resumed sexual activity about a month after surgery. The surgery is safe and doesn't reduce fertility or sexual function because it doesn't touch the testicle at all, Ugarte said.

"After one year, his testicular function is perfect. And he's feeling all right," Ugarte said.

Since then, two other men have had the surgery.

The researchers, who published their findings online Oct. 22 in the Journal of Sexual Medicine, say they wanted to get the word out because more men are contacting them with body-image issues, he said.

"It's very well-known that most of the men's magazines have techniques or pills or products" for penis enhancement, Ugarte said. "But now, patients also want to have bigger testicles, not just the penis."