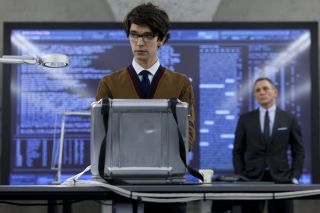 The new Q quartermaster in 'Skyfall,' played by Ben Whishaw, thinks he can do more damage than Bond with just a laptop.
(Image: © Columbia Pictures, MGM)

James Bond's latest outing, "Skyfall," shows how secret agents struggle to survive in a world where spy covers can be blown by an act as simple as uploading a YouTube video. But the film also suggests that even the best secret agents can be startlingly ignorant of basic online security rules and safety.

The British Secret Intelligence Service, better known as MI6, finds itself under siege in "Skyfall" as it tries to prevent some very important information from leaking onto the Internet. The service comes under fire both from cyberattackers and from British politicians who doubt whether the spy agency can remain relevant in a globally connected, information-saturated world.

By spending most of his time in his usual globetrotting pursuit of the villain, Bond (played by Daniel Craig) succeeds in avoiding any major cybersecurity mistakes. The same can't be said for his steely boss, M (Judi Dench), or MI6's new quartermaster Q (Ben Whishaw).

(Warning: The rest of this article contains plot spoilers.)

The emphasis on cybersecurity threats goes hand-in-hand with Raoul Silva, the main villain of "Skyfall" — played with villainous delight by Javier Bardem — who introduces himself to Bond in a room filled with the skeletal metal racks of computer servers. Silva proceeds to boast of his ability to do almost anything online, whether interfering with satellite signals over Kabul or destabilizing multinational corporations through stock market manipulation.

Silva's shadowy schemes present a stiff-enough challenge to Bond and colleagues. But the other big part of MI6's problems in "Skyfall" comes from the woeful ignorance of the agency's best people regarding basic online security steps.

When M receives an extremely suspicious pop-up message on her personal laptop that is clearly from Silva, she does the right thing by closing … wait, is she clicking on it instead? Isn't that how people are always getting viruses or other nasty pieces of malware on their computers? Luckily for M, it's only a warning from the villain. [6 Signs Your Computer Has Been Infected ... and 4 Ways to Fix It]

The new, younger Q really should know better. But the confident young cyberwhiz ignores the axiom that your network is only as secure as its weakest link. Instead he connects the villain's personal laptop to the entire MI6 network in his attempts to decrypt the information on it. This seems like the equivalent of wheeling a wrapped, bomb-shaped gift from a sworn enemy into your office without even bothering to peek inside. The results, needless to say, do not turn out well.

Regardless of MI6's mistakes, Silva appears to hack the intelligence agency's network almost at will during their game of cat and mouse. He carries out real-world espionage by turning on the gas in MI6 headquarters with some explosive results — an attack that echoes the real-world damage caused by Stuxnet on Iran's nuclear program centrifuges, as well as demonstrations of how cyberattacks can lead the way to industrial espionage at power plants or wastewater facilities.

Q boasts he can do more damage sitting in front of a laptop in his pajamas one morning than Bond could do in a year. His smugness is short-lived, of course. In the end, he concedes to Bond that "somebody still has to pull the trigger" — just the job for 007, the man with a license to kill.