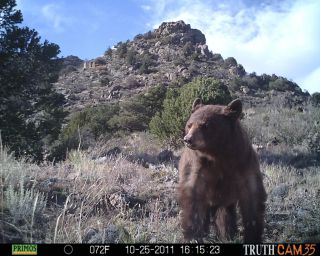 Mountain lions, bighorn sheep and scruffy black bears are among the stars of new photographs released by the Colorado Bureau of Land Management (BLM) this week.

The wildlife caught on candid camera were gathering around water tanks deployed by the BLM to manage grazing and improve water access for wild animals on public lands. Cameras monitor the water tanks, also known as "guzzlers," capturing everything from wild deer to coyotes to mountain lions taking advantage of the free drinks.

"Biologists use these cameras to gather invaluable information regarding species use of various habitats," Matt Rustand, a wildlife biologist at the BLM's Royal Gorge Field Office, said in a statement.

But the photos are also a rare opportunity to get up close and personal with normally shy critters. In one shot, a bear stands facing the camera, head tilted to one side as if posing. In another, a spotted deer stands against a mountain panorama, the sky tinged pink with sunrise. [See the critter cam images]

The cameras have helped make the guzzlers more effective, according to the BLM. In one case, wildlife officials fenced in a water tank to keep cattle out while allowing deer and elk to leap in. But the cameras soon revealed that the fence dissuaded the wild animals, prompting the BLM to remove the barrier.

The cameras will continue snapping candid moments in the Rockies, according to the BLM.