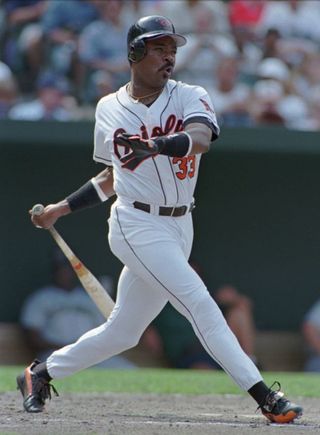 Baltimore Orioles Eddie Murray hit two home runs Wednesday August 14, 1996 against the Milwaukee Brewers in Baltimore. Murray has spent the last 20 years trying to make some sense out of the crazy game of baseball. Sometimes he'll be stunned by a trade, such as the one that brought him back to the Baltimore Orioles last month. The deal came after the Cleveland Indians, for reasons still unclear to Murray, decided to make him a part-time player. AP Photo/John Mummert

A baseball fan and statistics buff has proven that clutch hitters really do exist, putting statistics behind the obvious.

The new study, by math and economics student Elan Fuld of the University of Pennsylvania, was announced by the university Thursday.

Fuld defined a clutch hitter as one who hits better at more important moments. He studied stats on 1,075 Major League players in the 1974-1992 seasons.

Factors determining a clutch hit: how many bases were occupied, the score at the time, the inning, and how many outs. He also counted sacrifice flies, in which a runner scores but no hit is recorded.

"What I found was that, when I included sacrifice flys in the analysis, there was overwhelming evidence that there were clutch hitters," Fuld said.

So who were the greatest under pressure? Frank Duffy, Eddie Murray and Luis Gomez stood out.

Bill Buckner, known as a choke artist for his Game 6 World Series error in 1986 that many remember as costing Boston the championship, was statistically proven to be a clutch hitter, too.

Fans and players have always known there's a lot of psychology to hitting.