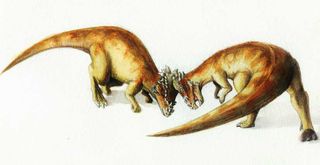 Fossilized skulls of dome-headed dinosaurs retain signs of injuries from violent head butting or head shoving, according to a presentation today at the Society of Vertebrate Paleontology's 72nd Annual Meeting held in Raleigh, North Carolina.

The dinosaurs, known as pachycephalosaurs (meaning "thick-headed lizards") have long puzzled paleontologists, who wondered why the heads of these dinosaurs looked to have built-in football helmets.

It's been suspected that dome-headed dinosaurs fought with their heads, but the latest investigation provides some of the most direct evidence for this antagonistic behavior.

"Aggressive behavior is rampant in modern vertebrates, and birds and crocodiles are no exception," Joseph Peterson, who led the research, told Discovery News. "While neither group has a bowling ball-like structure on top of its head, the head-slapping behavior of crocodiles and the face-pecking observed in a variety of birds suggest that 'using your head' is not unique to pachycephalosaurs and domes likely evolved in response to such behavior."

Peterson, a professor in the University of Wisconsin geology department, and his colleagues took CT scans of the skulls and compared the distribution of lesions to those on the skulls of birds, crocodilians, and mammals- particularly mammals with horns.

While the sex of the studied dinosaurs is unknown, he suspects that males were the ones fighting. As for today's head banging animals, the dinosaurs perhaps fought over mates, territory and rank.

The CT images further revealed areas of low bone density, suggesting that some of the dinosaurs' injuries were in the process of healing.

"It is not known if these injuries resulted in the death of the animal, and actually appear to be surface damage followed by a secondary infection," Peterson explained.

He added that cranial injuries have been identified in a number of ceratopsians like Triceratops. These dinosaurs are known for their stocky bodies, head horns, beaks and fondness for plants.

It is likely that these dinosaurs also fought with their heads, possibly locking horns as some horned and hoofed animals do today.

Other animals therefore might have regularly heard the sounds of dinosaur heads bashing into each other during the Jurassic and Cretaceous Eras.

"While no other animal has a head built like pachycephalosaur, cranial ornamentation ... is not all that rare in nature," he said.

Andrew Farke, curator of paleontology at the Raymond M Alf Museum of Paleontology in California, told Discovery News, "Based on all of the evidence, I think it is likely that pachycephalosaurs butted their heads against 'something' -- probably each other. Everything, including the new work from Peterson and colleagues, is consistent with this idea."

Farke continued, "Certainly, not all dinosaurs butted heads -- some have skulls better suited to this than others. But, for the thick-headed pachycephalosaurs, there is little doubt in my mind that they were ramming their skulls."

He said it's also possible that the dinosaurs were ramming their heads into the bodies of foes, and not just engaging in head-to-head combat.

"In any case," Farke concluded, "I find it hard to imagine that such a heavy structure was only for showing off."