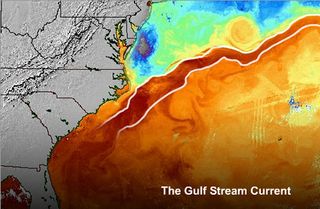 Last fall, fishermen in the Northeast United States noticed stronger currents and higher water temperatures than usual, so they tapped scientists from the Woods Hole Oceanographic Institution in Massachusetts to help them find out what was going on.

A study by the scientists, published recently in the journal Scientific Reports, suggests the cause was a change in the direction of the Gulf Stream, the current that ferries warm water from the Gulf of Mexico northeast into the Atlantic and along the U.S. East Coast. The scientists found that the center, or core, of the Gulf Stream was diverted as much as 125 miles (200 kilometers) to the north of its average position, according to a WHOI statement.

In late October 2011, temperatures increased at two deep-water sensors attached to lobster traps off Nantucket by as much as 12 degrees Fahrenheit (6.7 degrees Celsius) over the course of several days. That pushed water temperatures above 64 F (18 C), which is very unusual in the waters off southern New England for that time of year.  It's also 4 F (2 C) higher than temperatures have been at one of these locations in the last decade, said study author and WHOI researcher Glen Gawarkiewicz.

While the diversion lasted for only a couple weeks, the warm water stuck around for months, into early 2012.The strange conditions likely had and will have an effect on marine life near the edge of the continental shelf, the underwater extension of the North American continent that creates relatively shallow waters until it abruptly drops off. The continental shelf off the Northeast  is home to an abundance of fish. Studies in Northeast waters have shown that temperature increases of 4 F (2 C) have caused major northward shifts in populations of silver hake, a commercially important fish.

In spring 2012, migratory bluefish and striped bass were also seen off the coast of Cape Cod much earlier than in previous years. But more research is required to determine if the Gulf Stream diversion was the cause.

It's still unclear exactly why the Gulf Stream shifted so far to the north, Gawarkiewicz told OurAmazingPlanet. One possible explanation is that the heavy rainfall dropped by Hurricane Irene affected its course by altering ocean salinity. Another possibility is that it was jolted northward by an eddy of cold water off the southeastern United States that appeared in the fall of 2011, he said.

Typically, the Gulf Stream only indirectly influences ocean currents and temperatures near the continental shelf south of New England when eddies separate from the Gulf Stream and drift northward,  causing limited warming.