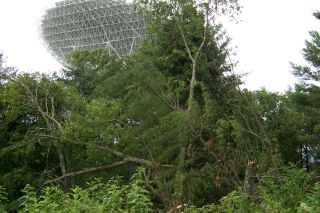 Scene after an intense storm known as a derecho moved through Pocahontas County, W.Va., in June 2012. The Green Bank Telescope is in the background.
(Image: © NRAO, Green Bank)

Until recently, most inhabitants of Pocahontas County, W.Va., didn't know the term derecho. But after the now infamous straight-line windstorm moved through this rural West Virginia County on June 29, the word became part of the local vocabulary. In spite of the derecho's significant toll, county residents found the aftermath to be less devastating than anticipated, largely thanks to local emergency services personnel and assistance provided by the staff and facilities of NSF's National Radio Astronomy Observatory (NRAO) in Green Bank.

The fast-moving storm that hit the Midwest and mid-Atlantic on the evening of Friday, June 29 left much of West Virginia without electrical power, phones or internet service. Most of Pocahontas County, where the observatory is located, was without power and running water for six to 12 days. Telephone and Internet services also were severely disrupted.

NRAO staff members moved swiftly to help their neighbors. Using the observatory's emergency generators, housing and water storage system, the staff turned the facility into a resource for support and recovery.

During the first days of the power outage, not only was telephone service disrupted, several emergency radio towers also were out, limiting the distance over which emergency personnel could communicate. The observatory had one of the few telephone systems that worked, so first responders conveyed information to NRAO telescope operators who relayed critical messages to the rest of the response team. The operators served as a critical link between local ground radio communications and phone communications within the county emergency 9-1-1 system.

In one of the most dangerous emergencies during the crisis, residents who needed continuous at-home oxygen were at risk, lacking power to keep the oxygen flowing. NRAO opened its residence hall (which was powered by an emergency generator) to anyone in medical need of electricity and a place to sleep.

There was no bulk ice available in the Green Bank area until July 3, four days after the disaster struck. NRAO let local clinics and pharmacies move medications that required refrigeration, e.g., insulin, to its refrigerators. Grocery stores and the Senior Center preserved perishables at NRAO as well.

The NRAO facility also opened its facilities to provide drinking water, showers, laundry and air conditioning to all area residents. The observatory's bunkhouse, normally used by visiting students, provided residents the opportunity to shower, wash clothes and cool off from the 90-100 degree heat in an air-conditioned space. Members of the West Virginia Army National Guard, called in to aid the county, also used the bunkhouse.

The cafe in the observatory's Science Center served food and provided additional air-conditioned space, as well as a place for Red Cross volunteers to provide meals to the community. Emergency personnel also had a place to charge ground radios, electric wheelchairs and other medical equipment.

"The most impressive aspect of this outpouring of assistance was that it wasn't officially planned or scheduled, or even requested. When NRAO learned of a need that they could fill, they just did it," said Kenneth "Buster" Varner, chief of the local Bartow-Frank-Durbin Fire and Emergency Rescue Company.

At an award ceremony later in the year, the NRAO staff received the Associated Universities, Inc. Community Service Award. The award honors observatory personnel who have exceeded all expectations in their outreach and help to local communities.

"Without your facilities and your dedication and passion to community service, the outcome would have been far worse," said David Fleming, president of the Pocahontas County Commission. "We would have lost more than electricity and material goods; we would have lost lives."

Editor's Note: The researchers depicted in Behind the Scenes articles have been supported by the National Science Foundation (NSF), the federal agency charged with funding basic research and education across all fields of science and engineering. Any opinions, findings, and conclusions or recommendations expressed in this material are those of the author and do not necessarily reflect the views of the National Science Foundation. See the Behind the Scenes Archive.