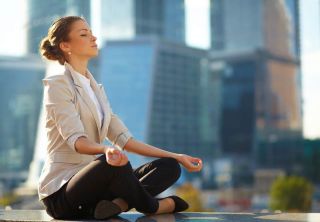 In 2008, then-presidential candidate Barack Obama got himself into trouble by saying "bitter" voters "cling to guns or religion" in response to hard times. Obama later apologized and recanted the statement, but new research suggests he may not have been entirely wrong.

People do turn to spirituality after a bad day, according to a study published online Aug. 1 in the journal Personality and Social Psychology Bulletin. And good news for spiritual folks, it works.

"We find that having a really spiritual day, committing to a power higher than yourself, carefully considering a purpose larger than yourself, it ends up leading to a lot of well-being," said study researcher Todd Kashdan, a psychologist at George Mason University in Virginia. "We find profound levels of meaning in life, greater positive emotions, less negative emotions, higher self-esteem."

A number of studies have found links between spirituality and happiness. A sense of spirituality, defined as the search for the sacred to differentiate it from organized religion, has even been linked to young women having more sex, perhaps because they feel a greater sense of interconnectedness and intimacy with others.

The participants were a mix of religions, with 34 percent identifying as Catholic, 18 percent as Protestants, and the rest a mix of atheists, Buddhists, Eastern Orthodox, Mormons, Muslims and other faiths.

The diary analysis first found that daily spirituality is associated with a boost in self-esteem and positive mood. The reason, Kashdan told LiveScience, seems to be that spirituality gives people a sense of meaning in life. People's life meaning statistically explained 100 percent of spirituality's positive effect on mood, and 93 percent of the self-esteem boost. [8 Ways Religion Impacts your Life]

"If today you're in a funk … tomorrow you're much more likely to be spiritually inclined, to engage in spiritual practices and double down on your focus on things that transcend humanity," Kashdan said.

In turn, a spiritual day today led to a happier tomorrow, with people reporting greater meaning in life the day after they'd engaged in spiritual practices.

The same was not true for non-spiritual people, who became even less likely to engage in spiritual practices after a bad day.

The findings highlight how "clinging" to religion shouldn't necessarily be seen in a negative light, Kashdan said.

"Happiness is fleeting, but profound meaning is something like a stable architecture you can work with," Kashdan said. "If I know I have this profound meaning, it sticks with me despite bad things happening."