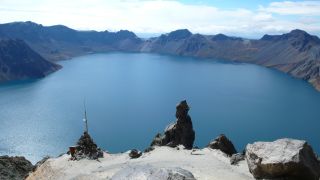 A very hazardous volcano at the border of China and North Korea is growing more active, and might erupt in the next few decades, researchers studying the area say.

About 1,100 years ago, the Changbaishan volcano in northeastern China erupted, shooting superheated flows of ash and gas up to 30 miles (50 kilometers) away and blasting a 3-mile-wide (5 km) chunk off the tip of the volcano. The explosion, known as the Millennium eruption because it occurred close to the turn of the first millennium, was one of the largest volcanic events in the last 2,000 years.

Since the Millennium eruption, Changbaishan has seen three smaller eruptions, the most recent of which took place in 1903. Starting in 1999, driven by signs of resumed activity, scientists established the Changbaishan Volcano Observatory.

Now, data collected over the past 12 years suggest that changes in seismic activity, ground deformation and gas emissions all spiked during a brief period of heightened activity from 2002 to 2006. This suggests the magma chamber beneath Changbaishan has awakened, researchers studying the volcano say.

The researchers saw the number of earthquakes increase dramatically during this burst of activity. From 1999 to 2002, and from 2006 to 2011, researchers detected seven earthquakes per month. However, from 2002 to 2006, this rate increased to 72 earthquakes per month, peaking in November 2003, which saw 243 events. Most of these quakes are tied to a region 3 miles beneath the volcanic crater that has risen slowly over the years, which suggests magma is creeping upward.

Gas emissions from hot springs near the volcano show rises in carbon dioxide, hydrogen, helium and nitrogen gases. The researchers say this could be related to outgassing from magma. The ground also expanded briefly and rapidly during the 2002-2006 period. [Album: Volcanoes from Space]

Although Changbaishan does not seem in danger of imminent eruption, the researchers say this unrest suggests an explosion could be expected in the next couple of decades. Changbaishan is at the most risk of eruption of the dozen or so volcanoes in mainland China, and potentially could have the most catastrophic effects of all of them, said researcher Jiandong Xu, a volcanologist at the China Earthquake Administration in Beijing.

The researchers will focus on analyzing what hazardous effects an explosive outburst on the scale of the Millennium eruption might have in the future.

"We need to upgrade our current monitoring system in order to be able to meet the need for the early warning system for Changbaishan," Xu told OurAmazingPlanet.

The scientists detailed their findings online Aug. 22 in the journal Geophysical Research Letters.