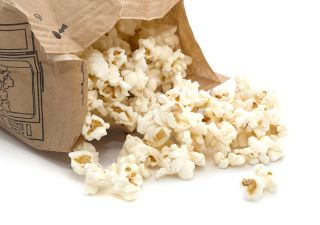 Microwave popcorn has been blamed for lung disease.
(Image: © Popcorn image via Shutterstock)

Every microwave-popcorn connoisseur knows that the toasty golden aroma that billows into the room the moment you open a fresh bag is half the appeal, as important as a fine wine’s bouquet.

But can an unrestrained gusto for that moment cause permanent lung damage?

A Colorado jury has decided it can. Denver native Wayne Watson, 59, was awarded a $7.2 million dollar settlement on Wednesday (Sept. 19) in his case against a microwave-popcorn manufacturer and the two grocery chains that kept him supplied, according to CBS Denver.

Watson argued that the popcorn manufacturer Gilster-Mary Lee, as well as Kroger and Dillons grocery stores, should have put warning labels on their microwave popcorn, which he says is responsible for giving him a rare respiratory condition called bronchiolitis obliterans, also known as “popcorn lung.”

The condition earned its nickname because it has been linked in the past to occupational exposure to the fumes of a chemical called diacetyl, which was, until a few years ago, the main ingredient that microwave-popcorn manufacturers used to impart that familiar artificial buttery flavor to their products.

A 2003 report from the National Institute for Occupational Safety and Health (NIOSH) found a significant incidence of bronchiolitis obliterans in microwave-popcorn factory workers who regularly came into contact with large amounts of fumes from the chemical. And according to the NIOSH, animal studies have shown that inhaling vapors from heated butter flavoring that includes diacetyl causes severe injury to airways.

But the Food and Drug Administration classifies the chemical as “Generally Recognized as Safe,” and before the diagnosis of Watson’s bronchiolitis obliterans, which irreversibly damages small airway branches in the lungs, no link between the consumption of microwave popcorn and the respiratory condition had been found.

Watson, though, was an uncommonly devoted popcorn consumer. He reportedly ate two bags a day for 10 years, and he has said that he regularly whiffed up the puff of popcorn exhaust that’s released from a newly opened bag to savor it.

In 2007, Dr. Cecile Rose, a lung specialist who diagnosed Watson and gave testimony in his case, wrote in a precautionary letter to federal agencies:  "We cannot be sure that this patient's exposure to butter-flavored microwave popcorn from daily heavy preparation has caused his lung disease. However, we have no other plausible explanation."

Some major microwave-popcorn manufacturers have now stopped using diacetyl, which occurs naturally in the fermentation of some beers and wines, due to the possible hazards it poses to workers and consumers.

But at least one of the substitutes for the old flavor now in use, 2,3-pentanedione, was shown in a recent study to also be a respiratory hazard.