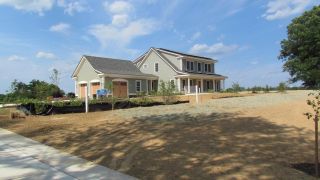 A home without living residents will test its running water, lights and appliances remotely to examine energy-efficient technologies.
(Image: © National Institute of Standards and Technology)

An uninhabited home has faucets running hot water, lights turning on and off, and household appliances coming alive at odd hours. But it's not a poltergeist banging around a haunted house — the ghostly behavior comes from a new U.S. experiment aimed at building homes that could create as much energy as they use.

The remote-controlled house features small devices that give off the same amount of heat and humidity as humans to help mimic the activities of a family of four over a year, according to researchers at the National Institute of Standards and Technology (NIST). That will help NIST test energy-efficient technologies, forge design standards for energy efficiency, and ultimately help American homeowners cut back on their utility bills.

"Results from this lab will show if net-zero home design and technologies are ready for a neighborhood near you," said Patrick Gallagher, NIST Director and Under Secretary of Commerce for Standards and Technology, in a statement.

NIST plans for the house — called the Net-Zero Energy Residential Test Facility — to make enough of its own energy to balance out its energy consumption and achieve net-zero energy usage.

The house not only includes energy-saving features such as solar water heating, but also has solar panels to create its own electricity on sunny days. A smart electric meter can detect excess energy and feed it back into the power grid.

Energy usage per U.S. household has fallen by 31 percent over the past 30 years because of energy-efficient technologies and building standards, according to the U.S. Energy Information Administration. But energy usage by growing swarms of household appliances and electronics has also almost doubled during the same period.