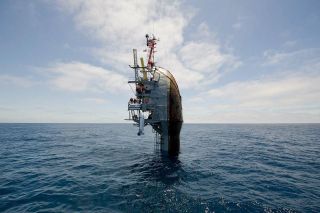 This U.S. Navy vessel looks alarmingly like a sinking ship tilted all the way onto its stern and poised for its death plunge into the ocean depths. But the ship actually represents a floating ocean lab with exceptional stability amidst the ocean waves.

The floating instrument platform (FLIP) is a 355-foot research vessel that resembles the front of a ship attached to a long tube section. Flooding the ballast tanks in the stern of the vessel allows it to "flip" and submerge 300 feet of its hull — a position that maintains high stability because so much of the vessel remains below the waves.

"FLIP's unique characteristic of a low-profile, stable observational platform has proven particularly useful over the years," said Dr. Frank Herr, head of the ocean battlespace sensing department at the Office of Naval Research. "It will continue to be a research vessel of choice for our naval scientists."

The FLIP vessel has no engine of its own and requires towing, but can hold 11 researchers and a crew of 5 for up to a month. It celebrated its 50th anniversary on June 29, 2012.

The Office of Naval Research owns FLIP, but the Marine Physical Laboratory at Scripps Institution of Oceanography at University of California in San Diego manages and operates the floating lab.