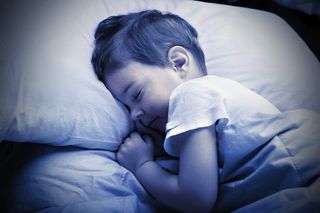 Getting enough deep sleep may play an important role in determining when puberty begins.

In a small new study, adolescents ages 10 to 15 were examined while they slept for increases in luteinizing hormone, which triggers ovulation in females and stimulates the production of testosterone in males.

Previous research showed that luteinizing hormone levels increase dramatically before puberty, and that this increase occurs initially only at night. The new study found that most of the surges occurred during slow-wave sleep, or deep sleep, from which it is particularly hard to wake people up.

The findings "raise concerns that the disordered or restricted sleep that is increasingly prevalent in the adolescent population may compromise normal pubertal development," the researchers said.

Because the study, conducted at Massachusetts General Hospital in Boston, involved only nine participants, the researchers noted that more work would be needed to confirm the results.

Participants experienced an average of four to six surges of luteinizing hormone during the night. Fifty-two percent of these surges began during deep sleep, the researchers said.

Participants initially had been recruited for a study on obstructive sleep apnea, but during the sleep study, they did not meet the criteria for the condition.

The study is to be published in an upcoming issue of theJournal of Clinical Endocrinology and Metabolism.

Pass it on: Inadequate sleep in adolescents may interfere with normal puberty.