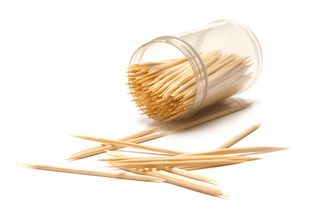 When a woman who had been feeling progressively weaker for months visited an emergency room with nausea, vomiting and low blood pressure, doctors diagnosed her as having an abdominal infection and treated her with antibiotics, according to a report of her case.

But the results of the woman's blood tests showed her liver enzymes were at higher-than-normal levels, and an ultrasound revealed a puss-filled cavity, about an inch and a half long, within her liver. By this time, the 45-year-old was in the intensive care unit with multiple organ failure. Several weeks of treatment with a cocktail of antibiotics were needed before she was well enough to go home.

Exploratory surgery was scheduled, and it turned out the woman had swallowed a toothpick that had somehow made its way from her digestive tract into her liver. In fact, there have been 17 reported cases where people swallowed toothpicks and wound up with liver abscesses, according to the researchers who reported the woman's case.

"Foreign body ingestion is not an uncommon problem," the researchers wrote in their report, adding that the cases are usually seen by pediatricians and psychiatrists. But in less than 1 percent of cases, the object makes its way outside of the gastrointestinal tract to another site within the body — and rarer still are cases where the object ends up in the liver.

In most cases where swallowed objects get out of the gastrointestinal tract, the objects have sharp ends, such as sewing needles or fishing bones. The stomach and the first section of the small intestine, called the duodenum, are the most common places along the tract where objects tend to escape, the researchers said.

The woman's case illustrates that patients who've swallowed a foreign object are difficult to diagnose, the researchers said. Patients rarely remember ingesting an object, and often have no symptoms for some time. When they do seek medical attention, their symptoms are nonspecific, and foreign bodies don't always show up on imaging tests.

But in such cases, early diagnosis and removal of the object is important, the researchers said. Ultrasound and CT scans may be best for detecting foreign bodies, they said.

"Toothpick injury of the gastrointestinal tract is often associated with considerable morbidity," they wrote.

The report is published today (Sept. 10) in the journal BMJ Case Reports.

Pass it on: A woman's liver problems were attributed to the ingestion of a toothpick months earlier.