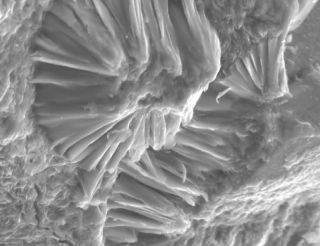 In the past decade, astronomers have observed clay materials on Mars that seem to indicate large bodies of water once filled the Martian surface. But new research suggests that magma could form some of these slick deposits rapidly, and ancient Mars may not have been as wet as we thought.

A region of French Polynesia has similar deposits of these strange clays, which scientists found were formed by cooling magma rather than water.

"It was the first time that clays were shown to originate from another process than aqueous alteration," researcher Alain Meunier, of the Université de Poitiers in France, told SPACE.com by email. "The consequence was that, even if clays need water to be formed, this does not mean that they need liquid water."

Since water is thought to be essential for all life, the Martian clay findings complicate the question of whether early Mars was likely to have been hospitable to life. [Photos: The Search for Water on Mars]

Along riverbeds, near glaciers, and near oceans, clays on Earth tend to appear near sources of water. Layers of rock gradually weather away, their chemicals transported and mixing to form clay. The process takes time, and so the presence of clays on Mars would seem to indicate relatively long-standing bodies of water, such as oceans, lakes, and streams.

But four years ago, Meunier, working with a group of geologists, found that clays at the Moruroa Atoll in French Polynesia formed quickly with cooling magma rather than slowly with cold ocean water. As the magma cooled, small voids inside of the solidifying lava behaved as tiny pressure-cookers, forming the last generation of minerals, including clays. The iron-rich clays found at this Pacific Ocean atoll are similar in composition to some Martian mineral mixes.

The only samples on Earth that originated on the Martian surface come from rocks blown from the Red Planet long ago that traveled through space to our world. One such sample is the Lafayette Meteorite, a rock of unknown origin that was found in the archives of Purdue University and not identified as of Martian origin until 1931. Studying the meteorite with an eye toward the formation processes at Moruroa, Meunier's team, which included several geologists from the French-Polynesian group, found a number of similarities.

"The authors demonstrate pretty convincing evidence that some of the water that led to clay formation was derived from the magmatic gases," Brian Hynek of the University of Colorado told SPACE.com. Hynek, who was not involved in the research, wrote a commentary piece that appeared alongside the results, which were published in the journal Nature Geoscience on Sunday (Sept. 9).

The slick deposits on Mars provided a peek into the state of the surface early in the planet's history.

"Considering that clays witness the presence of liquid water, they implied that the physical conditions prevailing at the surface of the young planet were compatible with the liquid state," Meunier said.

Although Mars today is too cold for liquid water, with too thin of an atmosphere to hold onto it, the water-related formation of clays has been one of the indicators that early Mars was warmer and wetter.

"The possibility of a magmatic origin for clays changes these considerations," Meunier said. [Photos: Mars Volcano Views from Space]

But the results don't mean that early Mars was a barren desert. There are other signs that the young planet had water on its crust, including extensive river systems, lakes, and oceans.

Hyneck pointed out that that not all Martian meteorites show evidence of a magma-related formation. Furthermore, only a handful of samples have traveled to Earth from the Red Planet, and they only come from a narrow range of times and locations on Mars.

A "stepping stone" for life

Because water is considered essential for living organisms to evolve, scientists think areas boasting clays could be good sites to search for life on Mars. But areas with magma-formed clays would be less ideal for hosting life.

"[This] clay formation process would have been quick and hot, and thus not good for biology," Hyneck said.

However, it's unlikely that all clays on Mars were created by the same process.

"As on Earth, clays probably formed in many different ways across the planet, and some of those are more favorable for biology."

Even in the unlikely scenario that all clays across Mars were created by cooling magma, the minerals they contain have been implicated in the early biochemical processes that led to RNA and DNA, the backbone of life as we know it. Their presence alone could be considered an important stepping stone for the earliest biological and chemical processes, according to Hyneck.

At the same time, early Mars was not the only time water lay on the surface.

"Liquid water has undoubtedly existed on Mars at a later epoch," Meunier said.

There are two NASA rovers currently exploring the Red Planet that are well situated to help further scientists' understanding of how the clays evolved. The Opportunity rover landed with its now-defunct sister rover Spirit in 2004, and continues to study Mars. The Mars rover Curiosity, which landed in August of 2012, is preparing to delve into the geological history of Mars.

"The Gale Crater, which will be explored by Curiosity, is a wonderful place to research the traces of the pre-biotic chemistry," Meunier said.