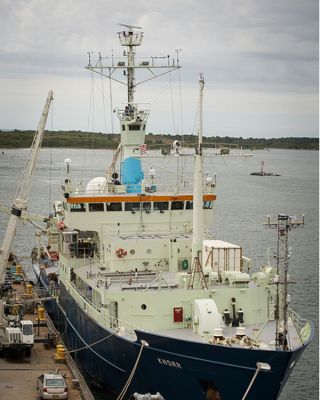 Over the past 50 years, the salty parts of the oceans have become saltier and the fresh regions have become fresher, and the degree of change is greater than scientists can explain.

Researchers are heading out into one particularly salty ocean region, in the middle of the North Atlantic Ocean, in the hopes of better understanding what drives variation in salinity in the upper ocean.

Ultimately, they hope, research like this will offer insight on the dynamics behind the dramatic changes in the ocean's salt content.

Many oceanographers have a hunch about what is going on: Climate change, Ray Schmitt, a senior scientist at the Woods Hole Oceanographic Institution, told journalists during a news conference Wednesday (Sept. 5).

"Climate is changing all the time, and some of that change is due to natural variation," Schmitt said. "The 50-year trend we are talking about, most of us believe is really due to the general trend of global warming."

This matters because the ocean is at the heart of the planet's water cycle: 86 percent of global evaporation and 78 percent of global precipitation occur over the ocean, according to NASA, the lead entity behind the project, called Salinity Processes in the Upper Ocean Regional Study (SPURS).

Over the ocean, more evaporation as compared to precipitation translates into saltier water. Meanwhile, in regions where precipitation is favored, water is fresher.

By tracking ocean salinity, researchers can better understand the global water cycle. Global warming is expected to intensify it, but current computer models do not predict the amount of change seen over the last 50 years, Schmitt said.

Aside from an increase in evaporation caused by warming, such factors as winds can also contribute to changes in salinity.

"We have a lot of questions about the basic physics we hope to resolve with this cruise," Schmitt said.

In addition to instruments attached to the research vessel itself, scientists plan to deploy a variety of drifting, remotely operated and moored sensors. European researchers are also visiting the site and collecting data.

Salinity data is also expected to come from the satellite-borne instrument, called Aquarius, launched about a year ago, as well as the global network of Argo floats, which measure temperature and salinity. [Satellite Gallery: Science from Above]

The research vessel Knorr departed Woods Hole, Mass., for the mid-Atlantic Thursday (Sept. 6). The researchers will spend about three weeks deploying their instruments, leaving some behind for when they return. Due to hurricanes Leslie and Michael, the vessel's captain decided to travel quickly to the east and then south to miss the worst of the weather on their way to the study site.

The mid-Atlantic isn't the only area where researchers hope to study ocean salinity in detail.

"SPURS is named because spurs come in pairs," said Eric Lindstrom, a physical oceanography program scientist at NASA headquarters, explaining that researchers hope to do something similar in a low-salinity region, such as the Bay of Bengal or an area south of Hawaii.

Here's how it works: Compared with fresh water, salty water is heavier, and so more prone to sinking. Temperature has a similar effect, with warmth causing water to rise. Differences in salinity and temperature drive a slow-moving conveyor belt of ocean currents that encircles the planet. The Gulf Stream, which carries warm water across the Atlantic to Europe, is part of this conveyor belt.

It may work out that higher salinity in some regions counterbalances fresher water in others, Schmitt said: "It is a delicate balance and what we think now is it is not too likely the conveyer belt is going to shut down anytime soon."