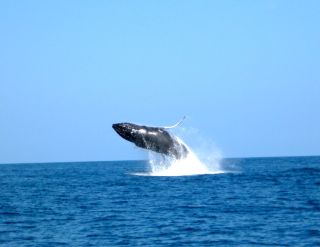 Whale watching season has started earlier than expected in Hawaii.

A single humpback whale was seen near the Big Island's Kailua-Kona area on Thursday, Aug. 30, according to Hawaii Magazine.

This may be the earliest the majestic animals have been seen in the area, according to a news release issued by the National Oceanic and Atmospheric Administration (NOAA).

The humpback was an adult and looked healthy; it was reported by Capt. Deron Verbeck of Wild Hawaii Ocean Adventures, according to West Hawaii Today.

In 2011, the first whale was spotted on Sept. 26. Before that the whale watching season began on Oct. 20, in 2010 and 2009, according to Hawaii magazine. NOAA scientists didn't have any theory as to why a humpback has been spotted earlier than usual this year, the release said.

About 10,000-12,000 humpback whales visit Hawaiian waters every year to mate, give birth and nurse their calves in the warm waters, where they are protected.

Humpback whale watching season in Hawaii generally goes from November through May, although small numbers of whales can be seen throughout the year.

Populations of humpback whales (Megaptera novaeangliae) were seriously depleted by commercial whaling but have been protected in most areas for the last 50 years, and most populations are growing.