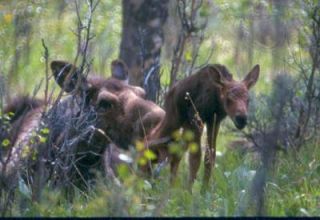 A moose mother and her newborn calf.
(Image: © Joel Berger)

It's a hard knock life for orphaned moose. New research found that juvenile moose without moms are more likely to get into fights and less likely to survive.

Motherless moose in their first winter were exposed to up to 47 times more aggression from adult moose, compared with their peers whose moms were present, the study found. The survival rate of orphaned moose also was about 8 times lower than moose with mothers, according to researchers from the Wildlife Conservation Society (WCS).

The research suggests the presence of a "helicopter mom" might be more critical than other factors, such as large body size, in predicting a moose's survival advantage. The study's lead author, WCS conservation biologist Joel Berger, explained that hunting policy changes in Canada and the United States might be warranted based on the findings.

"In some circumstances, the shooting of mothers with young has been permitted under the assumption that calf survival is minimally affected," he said. "Clearly, that is not the case."

The research, based on ten years of data on moose (Alces alces) in cold climates, appears in a recent edition of the journal Conservation Biology.