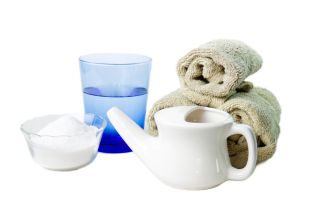 Two cases of people in Louisiana who died after contracting "brain-eating amoeba" infections from their own household water systems are prompting health officials to warn about a popular home remedy for treating sinus problems and allergies.

People who use neti pots to irrigate their nasal passages and sinuses should use only water that has been boiled, filtered or distilled, said the researchers at the Centers for Disease Control and Prevention who investigated the unrelated cases, which occurred months apart in 2011 in different parts of Louisiana.

The cases are the first evidence reported in the United States of municipal, disinfected tap water used in nasal irrigation causing infections of Naegleria fowleri, as the amoebas are properly called. The infections, which pass into the brain from the nose, are almost always deadly, with only one report of a survivor ever documented in the United States, according to the CDC.

"It’s a tragic infection," said researcher Jonathan Yoder, coordinator of waterborne diseases and outbreak surveillance at the CDC. However, infections with the organisms in general, and those stemming from household tap water in particular, are exceedingly rare.

"We don't know that there's a big risk from this — most cases occur from swimming in warm, fresh water," Yoder said. In fact, of the 32 N. fowleri cases reported in the U.S. between 2002 and 2011, 28 people were infected by contaminated recreational water activities, such as swimming in lakes or rivers, and two were infected by water from a contaminated geothermal source.

In the Louisiana cases, the researchers' investigation into the source of the infections could not solve the mystery of how the amoebas entered the water in the homes, Yoder said.

"We tested the water mains outside the homes, the water treatment plants, water towers — the organisms were not anywhere," he said.

The typical ways that municipal drinking water is treated, with filtration and chlorination, are very effective at killing disease-causing organisms, he told MyHealthNewsDaily. However, it remains possible that some organisms survived, he said. "We just don't have any evidence of how they got in there."

In the case of the 28-year-old man in southern Louisiana who died, the amoebas were found in a tankless water heater in the home. N. fowleri was also found in the bathroom sink faucet and tub faucet in the home of the 51-year-old woman in the northern part of the state who died, according to the report.

Infections have only been known to occur in cases where water is forced up the nose, Yoder said. There have not been any cases where people contracted the infections by bathing or showering, and "there is certainly not a risk" from drinking tap water, he said.

Both people who died had regularly used neti pots, according to the report. The pots come with packets of salt and instructions to dissolve the salt in water before using the pot to pour the solution into the nasal passages. During their investigation, the CDC researchers tested salt water prepared according to the neti pot instructions to see whether N. fowleri could survive in the salinity (the organisms are naturally found only in fresh water, not in salt water).

The researchers found that the amoebas survived in the salt water longer than four hours — a far longer time than neti pot users would likely wait between dissolving the salt and using the pot, Yoder said.

The finding shows that users should not rely on the salt packets as "a disinfection step," he said. People should purchase water that is labeled as distilled or sterile, or boil water for at least one minute in order to kill any organisms, he said.

The report of the CDC investigation is detailed today (Aug. 23) in the journal Clinical Infectious Diseases.

Pass it on: Neti pot users should use only sterile water, which has been boiled, distilled or filtered, the CDC says.