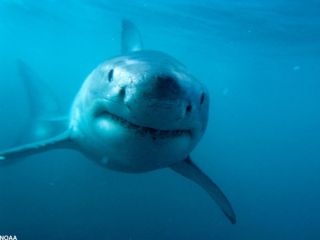 There are more shark attacks in U.S. waters than in any other region of the world.
(Image: © NOAA photo library. Used with permission.)

Statistically speaking, sharks in American waters are the most blood-thirsty of all their foreign counterparts, at least in respect to humans.

As Investor's Business Daily reports, sharks attack swimmers in the United States more than in any other place in the world. According to the International Shark Attack File (ISAF), a sprawling archive of human-shark conflict housed at the Florida Museum of Natural History, stateside sharks have accounted for a majority of all global attacks for eight of the past 12 years, peaking at 72 percent of the total in 2002.

So do sharks hate America? Or, alternately, are the fish just trying to assimilate to our country's well-known gluttony streak? Are American beachgoers just really annoying?

The answer to the first two questions is no, but the third is a little trickier. The sharks’ grudge isn’t personal, but American cultural habits, particularly the habit of going to the beach frequently and in great numbers, partially explain why teeth seem to gnash more freely in U.S. waters.

"The number of shark-human interactions occurring in a given year directly correlates with the amount of time humans spent in the sea," ISAF curator George Burgess writes in a summary of the file's 2011 shark-attack data. And if the simple idea that more people in the water for more time means more bites seems like just the sort of thing the sharks would want us to believe, check out this ISAF graph of Florida's population versus its reported shark attacks over the past century. [Infographic: Shark Attack Numbers]

The good news is that shark attacks in U.S. waters have actually been slowly decreasing over the last decade, with the 29 such incidents in 2011, making up 39 percent of the world total, hitting the lowest mark since 1998. Burgess hazards a few explanations for the decline, including the possibilities that the recession and heavy hurricane seasons have stifled recreational use of beaches; that overfishing has cut into American shark populations; and that increased media coverage of shark attacks and shark-attack prevention may have resulted in a better-educated, less-vulnerable public.

And since the public seems to be taking its shark news to heart, it bears mentioning that humans are actually a far greater threat to sharks than the other way around. Burgess notes that we kill millions of them every year in fisheries.

Even so, it doesn’t hurt to be prepared, and Burgess offers this worst-case contingency plan: “If one is actually under attack by a shark, we advise a proactive response. Hitting a shark on the nose, ideally with an inanimate object, usually results in the shark temporarily curtailing its attack. One should try to get out of the water at this time."