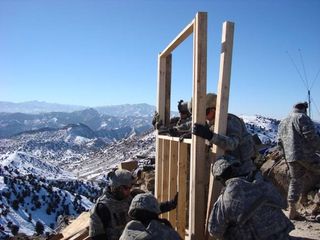 U.S. Army engineers build the walls of a base on a mountain in Afghanistan.
(Image: © U.S. Army)

Soldiers who need fixes to battlefield gear or new technologies must usually wait months before U.S. military labs send anything over. The U.S. Army hopes to speed up that rate of battlefield invention by sending mobile labs packed with futuristic 3D printing technology to Afghanistan.

The first of the $2.8 million mobile labs — each a 20-foot shipping container holding the latest manufacturing tools — deployed to Afghanistan in July, according to Military.com. They represent the new effort by the Rapid Equipping Force to deliver battlefield equipment as fast as possible to soldiers in the loneliest outposts.

Two engineers can work together inside each mobile lab to use 3D printers and Computer Numerical Control Machining systems to create parts from plastic, steel and aluminum on the fly. That means soldiers have access to specialized expertise if they ever have ideas or come up with battlefield innovations. [US Soldiers Make Real 'Predator' Machine Gun Pack]

3D printers have excited military planners because of its ability to theoretically transform any digital design into a physical object on the spot — as long as it has the raw materials. U.S. gun enthusiasts have already begun creating 3D-printed parts to use in working guns.

The U.S. government also sees 3D printing as a potential boost for the U.S. manufacturing sector. President Obama recently announced a $30 million investment in a new 3D printing institute that could add speed and flexibility to factories and workshops.