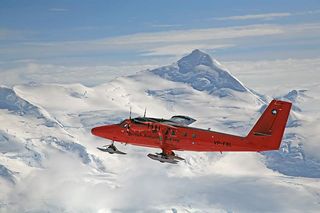 A volcano beneath Antarctica’s icy surface has been detected for the first time.

Under the frozen continent's western-most ice sheet, the volcano erupted about 2,300 years ago yet remains active, according to a study published Sunday in an online issue of the journal Nature Geosciences.

"We believe this was the biggest eruption in Antarctica during the last 10,000 years," said study co-author Hugh Corr, a glaciologist for the British Antarctic Survey (BAS). "It blew a substantial hole in the ice sheet, and generated a plume of ash and gas that rose around 12 kilometers (7.5 miles) into [the] air."

Although ice buried the unnamed volcano, molten rock is still churning below. David Vaughan, a glaciologist with the BAS and a co-author of the new study, said the discovery might explain the speeding up of historically slow-moving glaciers in the region.

“This eruption occurred close to Pine Island Glacier on the West Antarctic Ice Sheet," Vaughan said. "The flow of this glacier towards the coast has speeded up in recent decades, and it may be possible that heat from the volcano has caused some of that acceleration."

The effect is similar to a person gliding down a Slip 'n Slide: Volcanically melted water beneath the colossal ice sheet lubricates its movement, assisting its gravity-powered journey toward the Antarctic Ocean.

"This wider change most probably has its origin in warming ocean waters," he said, which most scientists attribute to global warming resulting from human activity, such as the use of fossil fuels.

Corr and Vaughan used ice-penetrating radar to locate the volcano just west of the expansive Pine Island Glacier. Specifically, they detected a New Jersey-sized plot of ash at more than 8,000 square miles (20,700 square kilometers) beneath the ice.

The debris is a hallmark of an ancient eruption.

“The discovery of a ‘subglacial’ volcanic eruption from beneath the Antarctic ice sheet is unique in itself," Corr said. "But our techniques also allow us to put a date on the eruption, determine how powerful it was and map out the area where ash fell."

Scientists like Corr have used radar and other technologies to find other features, such as lakes, tucked beneath the Antarctic ice. Researchers also think that magma-heated rock beneath Greenland's massive ice sheet is accelerating its melting, but whether a volcano or just a pool of magma is responsible is still a matter of debate.