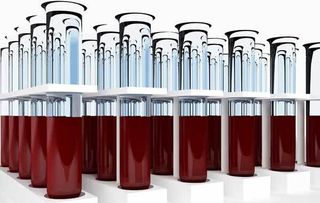 People with type AB blood may have a higher risk of heart disease compared with those whose blood type is O, according to a new study.

“While people cannot change their blood type, our findings may help physicians better understand who is at risk for developing heart disease,” said study author Dr. Lu Qi, assistant professor of nutrition at the Harvard School of Public Health in Boston.

The association with blood type held even after the researchers took into account variables that affect people's risk of heart disease, such as cholesterol levels, diabetes and hypertension.

The results are "totally surprising," said Dr. Richard Stein, a cardiologist and spokesperson for the American Heart Association. While other smaller studies have suggested such a correlation, this is the first large-scale study to support the connection, he noted.

Stein said that while further research is needed, blood type could be added to the list of factors that are considered when a doctor assesses a patient for risk of heart disease, particularly because blood tests to determine it are inexpensive and have no side effects.

In order to reduce heart disease risk, people should exercise, eat right and keep their weight and cholesterol in check, Stein said.

Knowing that one's blood type puts them at higher risk may increase people's motivation to "take care of themselves and stop their bad habits," Qi said.

But these links were found in very small studies, Stein said, so explaining the correlation requires further research, he said.

The paper is published today (Aug. 14) in the journal Arteriosclerosis, Thrombosis and Vascular Biology.

Pass it on: People's blood types might have an effect on their heart disease risk.