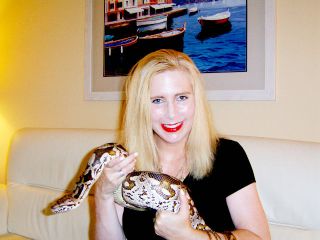 Taryn Hook with Larry, a beloved boa constrictor whose affliction prompted the lifelong keeper of reptiles to get in touch with a researcher who hunts down viruses.
(Image: © Larry Taormina, Ph.D. )

In 2009, Taryn Hook brought Larry, a Dumerils boa constrictor, a species native to Madagascar, to see Chris Sanders at his veterinary hospital in Portola Valley, Calif.

Larry was ill. Again. And this time Hook feared the worst. The snake had been sickly since she first got him in the late 1990s, when he was the size of a pencil.

"He's a member of the family," Hook said. "He even sits on the couch with us. He watches American Idol." (Hook's husband is also named Larry, although snake Larry has been in her life longer than human Larry.)

Blood tests had been inconclusive, but they showed that Larry might have IBD, an affliction that affects pythons and boa constrictors. Biopsies from animals with the disease show their cells filled up with globules of proteins — inclusions — which cause a host of weird symptoms, from projectile vomiting to an eerie behavior called stargazing.

YouTube videos shot by worried pet owners, some tender, some bizarre, show snakes of all sizes raising their heads over and over, staring into thin air, and listing drunkenly from side to side. "They kind of go crazy," one scientist said.

There's no cure for the disease. It moves swiftly in pythons, and can progress slowly in boa constrictors, but it is always fatal. And it's infectious, moving from snake to snake, though the mechanism of transmission isn't entirely clear. It's also not clear how snakes contract the disease in the first place, but if one animal in a collection gets IBD, typically all the animals are euthanized.

Hook wanted to know what else could be done for her sick boa constrictor.

The vet, Chris Sanders, suggested that Hook get in touch with a guy just up the road at University of California, San Francisco — scientist Joseph DeRisi. DeRisi's accomplishments in viral research were myriad, but in 2008, his lab had identified a mystery virus that had been killing off parrots and macaws.

"That was a viral infection that had been around for 20 plus years, and no one had been able to identify what was causing it," Sanders said. He thought that maybe the lab could do the same thing for IBD.

"I was desperate," Hook said. "I sent a letter with a picture of myself and Larry to Dr. DeRisi, pleading for his help. I said I thought he was Larry's last hope."

"I don't usually get fan mail with pictures of people with their snakes," DeRisi, a Howard Hughes medical investigator, told LiveScience.

A conversation with Chris Sanders, Larry's vet, confirmed that yes, IBD was a real disease, and it was a big problem, not just for pet owners but for zoos and aquariums.

"It did seem like an interesting mystery," said post-doctoral researcher Mark Stenglein, the lead author on the research published today.

Read how DeRisi and Stenglein uncovered a deadly virus, thanks to Larry the snake.