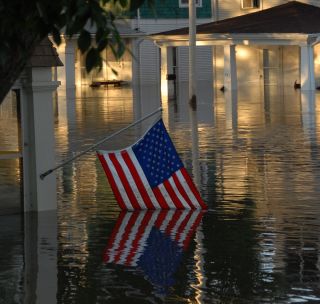 Rising seas threaten to drown island countries such as the Maldives and Kiribati in the era of global warming — a dire scenario that has forced leaders to plan for floating cities or consider moving their entire populations to neighboring countries. Most countries won't need to take such drastic steps to simply survive, but many more will similarly experience the uglier side of climate change.

The countries potentially facing the worst fates may not necessarily experience the greatest climate change, but instead lack the resources to cushion their people against climate-related disasters such as hurricanes, floods, heat waves and droughts. That has historically made a huge difference in rates of death or displacement from such events — Hurricane Jeanne killed just three people in the U.S. in 2004, but resulted in the deaths of more than 1,500 people in Haiti and displaced about 200,000 Haitians.

"This of course is different than future likelihood to suffer, but I believe that those who suffered most in the past are probably most vulnerable to future disasters, because they are unable to prepare for, cope with, and recover from these kinds of disasters," said J. Timmons Roberts, a professor of environmental studies and sociology at Brown University.

The most fortunate countries could fortify themselves against the worst of climate change and possibly take in climate change refugees from other parts of the world. Both historical data and climate model predictions have given some idea of what to expect.

Other regions could see even more radical changes in their normal climates.

"Central America, the Caribbean and the Mediterranean are projected to experience what is now considered drought as a new normal condition," Wehner told InnovationNewsDaily. "The impacts on agriculture could be severe, especially on impoverished nations."

The melting Arctic is experiencing some of the greatest warming — often with devastating consequences for local wildlife and people — but climate change's greatest impact may take place in more densely populated regions. Jason Samson, a former Ph.D. candidate at McGill University in Canada, highlighted the relationship between climate conditions and population density in a 2011 paper published in the journal Global Ecology and Biogeography. [Sink or Swim: 6 Ways to Adapt to Climate Change]

"Strongly negative impacts of climate change are predicted in Central America, central South America, the Arabian Peninsula, Southeast Asia and much of Africa," wrote Samson and his colleagues.

That paper's findings echo the vulnerable regions identified by the Intergovernmental Panel on Climate Change (IPCC) — the Arctic, Africa, small islands (such as the Maldives and Kiribati), and the Asian and African megadeltas where huge cities filled with millions of people face rising seas, storm surges and flooding rivers.

Countries in the danger zone

So what countries face the greatest danger from climate change? Maplecroft, a British consultancy, has created a "Climate Change and Environment Risk Atlas," a list of 193 countries ranked by those most vulnerable to climate change because of factors such as population density or state of development.

The 2012 edition of the risk atlas identified 30 countries as being at extreme risk. The top 10 most at risk include: Haiti, Bangladesh, Sierra Leone, Zimbabwe, Madagascar, Cambodia, Mozambique, Democratic Republic of Congo, Malawi and the Philippines.

Some countries with lower risk ratings still have danger zones that face "extreme risk" from climate change. Maplecroft pointed to the southwest of Brazil and China's coastal regions as examples, even though both countries rate as "medium risk" overall. Six of the world's fastest-growing cities also received "extreme risk" ratings: Calcutta in India, Manila in the Philippines, Jakarta in Indonesia, Dhaka and Chittagong in Bangladesh, and Addis Ababa in Ethiopia.

The countries in the best position to adapt to climate change's challenges mostly include those in Northern Europe, such as Finland, Ireland, Sweden and Norway, CNN reported. Iceland topped the list, but the United States also had a relatively low risk rating.

The climate risk assessments emphasized the wealth difference between the most and least vulnerable countries. That has proven historically true as well, Roberts said. He and a colleague, Bradley Parks, looked at 4,040 climate-related disasters from 1980 to 2003 in their book "A Climate of Injustice" (MIT Press, 2006).

"The rates [of people killed or made homeless], when adjusted for population, were 100 times higher in some African and Pacific islands than in the USA," Roberts explained.

But even developed countries such as the U.S. face risks when it comes to climate-related disasters — regardless of whatever future climate change may bring. Wehner suggested that climate change during his lifetime would be "manageable" as far as living in the U.S., but added that his grandchildren would face tougher choices.

Roberts, who lives in Rhode Island on top of a hill near Narragansett Bay, took an even more cautious approach about buying beachfront property even in the U.S.

"While I would love to look out over the water, I would think twice before buying land or property, and especially before putting my family right at sea level, in a place that may suffer storm surge," Roberts said.