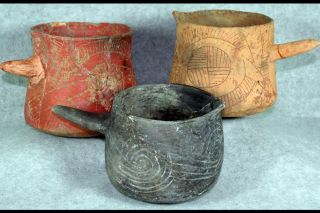 It appears inhabitants of North America have been seeking a caffeine buzz for at least a thousand years. These beakers, excavated from sites at Cahokia in southeastern Illinois, were apparently used by members of the Cahokia tribal group to consume something historically called “Black Drink.”

Research published by the Proceedings of the National Academy of Sciences, “Ritual Black Drink Consumption at Cahokia,” provides evidence that people living at and near Cahokia in southeastern Illinois were drinking liquids made with Ilex vomitoria and Ilex cassine, two forms of the holly plant that have substantial caffeine and theobromine. Residues of both have been found in pottery vessels dating to 1050 A.D.

The ritual beverage was prepared by drying holly leaves and small twigs, then placing them in a large pot with water, boiling them, and agitating the liquid into a froth.

“For many groups, Black Drink played a central role in the ritual cleansing and purging of the body when combined with fasting and vomiting that was an essential precursor to conducting any important activities. Euroamerican observers documented the prodigious consumption of Black Drink, especially by men, often followed by bouts of ritual vomiting, before individual or community religious rituals, important political councils and negotiations, ballgames or war parties.”

High caffeine drinks made from holly plants are still popular in South America. One variation is yerba mate. The members of the Cahokia tribal group apparently drank the liquid from beakers that look remarkably like present day coffee cups.

This is the first time researchers have scientifically documented that Native Americans were drinking Black Drink long before contact with Europeans. Researchers say evidence points to use of the plants far north of their natural habitats, implying some trade activity, and suggest the beakers may have been created especially for their role in the ritual ceremonies featuring Black Drink. The authors also add that the study bolsters earlier suggestions that Cahokia played an important role in the subsequent religious developments in the Southeast.