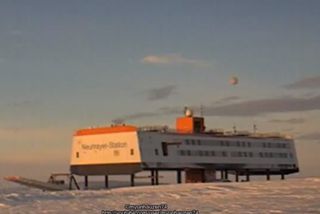 This YouTube screenshot reveals the blurry object floating above the Neumayer-Station III in Antarctica on Aug. 10, 2012. The object has garnered plenty of UFO claims.
(Image: © Screenshot, Myunhauzen74 @YouTube)

A video taken of the Antarctic research station Neumayer-Station III appears to show what some are calling a UFO over the South Pole.

The video posted to YouTube seems to show a round, blurry object floating above the station on Aug. 10. Speculation has run rampant, with conspiracy theorists and UFO buffs swapping explanations ranging from government collaboration with aliens to a top-secret test of some new cutting-edge secret weapon.

While a definitive explanation has not been found, several elements suggest a prosaic answer. The supposed UFO appears more or less directly over the research station; it also appears to be nearly perfectly round and about the right size for a balloon. Neumayer-Station III, a scientific research station, carries out tests and experiments in a wide variety of areas, including geophysics, meteorology and atmospheric chemistry. Weather balloons are used extensively to study and sample the atmosphere at different times and altitudes above Antarctica.

One UFO buff admitted that most of the evidence suggested it was indeed a balloon, except for one mysterious fact: "none could explain why the object appeared in just a few frames." It's true that the object appears in only a few frames of the footage. However this becomes much less mysterious when you realize that the original video has been sped up. That's what happens in time-lapse photography: objects that are not stationary for long periods of time (people, vehicles, animals, clouds, etc.) only appear in a few frames — depending of course on the frame rate of the video and how fast they move. There's nothing mysterious about it. [UFO Quiz: What's Really Out There?]

If it were a balloon that had been put aloft for hours, it would have been visible for a longer duration than seen in the video. On the other hand, not all experiments using balloons necessarily last for hours; some may only take a few minutes. It's also possible that someone at the station was merely conducting a routine equipment test in preparation for an upcoming experiment or sampling: The balloon went up, everything worked perfectly, so it came back down.

Though the "Neumayer UFO" is being discussed on various UFO and conspiracy theory websites, there's a glaring contradiction in suggesting it's evidence of extraterrestrials. If it is indeed a spacecraft instead of a balloon or some other mundane object, why would the government — which is routinely accused of going to extraordinary lengths to cover up all evidence of aliens — intentionally release the video to the public?

Unlike an Air Force base where people live and work nearby and can usually photograph or videotape what's in the skies above at will, Neumayer-Station III in Antarctica is essentially inaccessible to the public — except in limited ways such as a Web cam that the government has exclusive access and control over. Did this somehow get past the global UFO censors?

Conspiracy-minded people will always search for, and often find, anomalies, things that they don't understand or believe to be odd or unusual for some reason. For some people any ambiguous light or object in the sky they don't recognize can be turned into a possible UFO sighting.