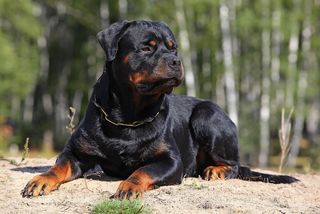 Owners of stereotypically aggressive dog breeds such as Rottweilers have more aggressive personalities themselves, a new study finds -- though this does not mean that they or their dogs are necessarily dangerous.
(Image: © Degtyaryov Andrey Leonidovich, Shutterstock)

Your canine companion might be saying more about you than you realize, new research finds.

Owners of stereotypically aggressive dog breeds such as Germen shepherds and Rottweilers are more likely to be hostile and aggressive themselves compared with owners of typically laid-back pooches such as Labrador retrievers, according to a new study.

In this study, aggressive dog-breed owners scored higher in the personality trait of psychoticism, which is marked by anger, hostility and aggression. (Psychoticism is different than psychopathy, a personality disorder characterized by manipulativeness and lack of empathy.)

"This might imply (although has yet to be proven) that people choose pets that are an extension of themselves," study researcher Deborah Wells, a psychologist at Queen's University Belfast, told LiveScience in an email.

The research, published in the October 2012 issue of the journal Personality and Individual Differences, is not the first to find personality differences in dog owners based on breed. Toy-dog owners, for example, score high on the personality trait of openness, characterized by appreciation of new experiences, according to a study presented at the British Psychological Society annual conference in London in April. The same study found that owners of pastoral and utility breeds such as collies and corgis were the most extroverted. [See What Your Dog's Breed Says About You]

Likewise, a study published in May in the journal Anthrozoos found that people with more argumentative personalities are more likely to choose bull terriers or other breeds with a reputation for aggression than more agreeable types.

Wells and her colleague Peter Hepper, also of Queen's University Belfast, recruited 147 dog owners from obedience classes in Northern Ireland and asked them to fill out a personality questionnaire. Only owners of German shepherds, Rottweilers, Labrador retrievers and golden retrievers were included in the questionnaire.

"We deliberately wanted to focus on breeds that are commonly owned, but at opposite ends of the spectrum in terms of public perception of temperament — both Germans shepherds and Rottweilers are commonly perceived to be aggressive, while labs and retrievers (breeds frequently used to advertise organizations such as Guide Dogs for the Blind) are more likely to regarded in a nonaggressive light," Wells said.

Through centuries of breeding, humans have created dogs as tiny as the Chihuahua and as big and broad-chested as the English Mastiff.

Of the personality traits studied, the only difference between breed types that emerged was in psychoticism, such that owners of stereotypically aggressive breeds were more aggressive themselves than owners of more relaxed dogs.

The study still leaves open the question of whether aggressive people choose aggressive dog breeds and then intentionally train them to be vicious, Wells said. Other factors beyond personality, such as allergies and size, can also influence dog-breed choice, she added.

"Just because someone with a higher psychotic tendency owns a breed that is widely perceived to be aggressive, does not necessarily mean that animal is a threat to society," Wells said.