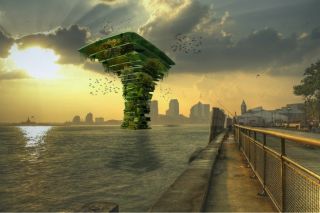 The floating Sea Tree would act as an offshore nature sanctuary for animals to live near cities.
(Image: © Waterstudio.NL)

Wild geoengineering schemes may aim to reverse global warming by reflecting sunlight into space or storing excess carbon dioxide, but they won't spare humanity from living through climate change in the next several decades. That means humans must adapt to life in a world where droughts hit harder, floodwaters rise higher and entire island nations may sink beneath the waves.

'Some adaptation ideas resemble science fiction made real — growing crops inside city buildings, floating villages and genetically engineered crops. Other solutions, such as floating agriculture and traditional species cross-breeding, draw upon the long history of human adaptation rather than futuristic technologies.

Waterworld homes: When the waters rise, tomorrow's buildings may rise with them as floating structures. Koen Olthuis, head of Waterstudio.NL, has begun working on projects ranging from floating apartments in the Netherlands to a floating mosque in the United Arab Emirates. The Netherlands firm has also designed a series of floating hotels, conference centers and other buildings for the Maldives, an island country in the Indian Ocean that faces complete submersion by 2080.

Another pioneering Dutch firm, Dura Vermeer, has already made floating buildings such as a greenhouse and an entire amphibious village in the Netherlands — all using many layers of plastic foam arranged into floating grids that are able to support concrete structures. Such technologies provide a new twist to the ancient human practice of building homes on stilts in perennially flooded countries such as Bangladesh.

Underground cities: Mucking about like imaginary mole people may sound unappealing, but moving more cities underground could offer added protection from the harsher extremes of climate change. Putting power lines underground has already made the difference for many cities between having electricity and seeing the lights go out in the aftermath of severe storms — and megacities such as Hong Kong also see the added bonus of saving on space by moving power stations and water reservoirs below the surface.

Life underground could even resemble more of a pastoral paradise rather than a grim dystopian film. One group of U.S. entrepreneurs has proposed building a "LowLine" park in an abandoned trolley station in New York City. A fiber optic cable could not only direct sunlight into the underground area to help trees and plants grow, but also screen out harmful ultraviolet rays — and electric lighting could help out during cloudy days or at night. [5 Skyscrapers for a Greener Future]

Floating farms: Bangladesh's 140 million people have already learned to live with climate change the hard way in a country where much of the land is less than 16 feet above sea level. Floods cover one- fourth of the country in an average year, and as much as 60 percent every four or five years. That has forced Bangladesh's farmers to create a homegrown adaptation to live in a world of rising seas and worse flooding — floating agriculture.

Farmers build floating rafts out of straw, rice stubble and a weed called water hyacinth, before adding upper layers of decaying waterworts to act as manure. The rafts become moveable floating surfaces that replace flooded agricultural land and can actually produce much more crops than traditional fields — an idea other countries might adapt with their own local twists.

Smart energy: A warming planet means many homes and businesses will use more energy and spend more on electricity bills to keep cool. Tomorrow's power grids must not only connect to new sources of clean energy — such as renewable solar, wind, tidal or geothermal power — but also become smarter to juggle the mix of old and new energy sources and respond quickly to changing energy demands at different times of day.

Some smart grids may represent more intelligent versions of the huge, central power grids that dominate industrialized countries. Others may pop up as smaller microgrids based on local energy sources such as solar or wind power, but are still capable of networking together to send energy to where it's needed.

Vertical farms: Many farmers can expect more severe droughts and a growing swarm of crop-damaging pests in a warmer climate. One possible solution comes from a formerly fringe idea that has begun to catch on across the world — vertical farms that consist of many levels reaching skyward (or even underground).

The vertical farms provide an indoor, controlled climate to grow crops in a space-saving setup that can prove more efficient than growing crops in open fields, said Dickson Despommier, a microbiologist and ecologist at Columbia University who helped pioneer the vertical farm movement. Countries such as the U.S., Sweden, the Netherlands, Japan, South Korea and Singapore have all begun experimenting with their own vertical farms.

Climate-adapted crops: Crops don't have to move indoors to survive if they can adapt to the droughts and temperature shifts of climate change. Drought-resistant corn that is able to grow with less water has already debuted in different versions from companies such as Monsanto, DuPont and Sygenta. The agribusiness giants have begun investing billions of dollars in genetically engineering "climate-ready" crops to resist drought, flooding, heat, cold and salt — an effort spanning 1,633 patents as of 2010, according to a report by the ETC Group.

Climate-adaptation can also come from identifying ideal traits in existing crops without genetic engineering, changing breeding tactics for crops, and planting a more diverse range of resilient crops. The International Rice Research Institute (IRRI) and the University of California-Davis used marker-assisted selection to identify a flood-tolerant gene in an Indian rice variety and move it to other rice crops. In another case, the African Rice Center has cross-bred Asian and African rice species to create more heat- and drought-tolerant crops.