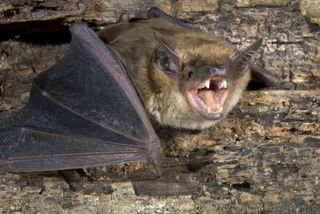 This bat is a member of the species Eptesicus fuscus (Big brown bat), which are found in the U.S.
(Image: © Bat photo via Shutterstock)

Some people living in a remote part of the Amazon jungle produce antibodies against the rabies virus, according to a new study. Protection against the highly deadly disease was previously thought to be impossible without vaccination.

Researchers took blood samples from 63 people in Peru, and seven of them were found to have antibodies that could fight a rabies infection. One of the seven had previously been given the rabies vaccine, but the other six present a medical mystery to the researchers, who are trying to understand how these antibodies developed.

The rabies virus attacks the central nervous system, including the brain, and is fatal to nearly everyone who doesn't get vaccinated after exposure. About 55,000 people worldwide die yearly from rabies.

"By and large, most folks have not presumed that humans provide an antibody response to clear the virus," said lead study researcher Amy Gilbert, a researcher for the Centers for Disease Control and Prevention.

These jungle inhabitants have a high incidence of rabies, and researchers were focusing on them to better understand the disease, which is typically spread to humans from the bites of animals. But the finding of the antibodies was unexpected.

"If you were going to look for such a thing … this is where you would find it," Gilbert said, who is with the CDC's National Center for Emerging and Zoonotic Infectious Disease.

That area in Peru is home to infected vampire bats, whose teeth are so sharp and bites are so small that a person could be bitten and not realize it, said study author Charles Rupprecht of the CDC.

The researchers hypothesized that some people developed immunity by receiving tiny amounts of the rabies virus from bat bites, never becoming so severely infected that their central nervous systems were affected.

Dr. Bruce Hirsch, who researches infectious diseases at North Shore University Hospital in Manhasset, N.Y., said the antibodies could indeed be the result of such "abortive infections," which occur when a virus enters the body but dies before multiplying significantly.

Such an infection "kind of functions like a vaccine does," said Hirsch, who was not involved in the study. Vaccines work by infecting people with a harmless form of a virus, prompting an immune response that creates protective antibodies against the stronger form.

However, Gilbert said it's impossible to know whether this hypothesis truly explains how the antibodies developed because there is no evidence of rabies infections in the people in the study.

Alternative theories suggest that people with the antibodies have particularly strong immune systems due to genetic variation, or that they were exposed to a different strain of the rabies virus than what has been studied, Hirsch said.

The research "certainly raises interest into whether there are novel treatments" that could be derived from this population's natural resistance, Gilbert said.

Regardless of how the antibodies developed, the study highlights the severe rabies risk that Peruvian populations face, Rupprecht said.

The majority of rabies deaths occur in the developing world. With vaccinations and immediate care following exposure, death from rabies has decreased in developed countries. The United States averages two rabies deaths a year.

But there have been only three cases of people in the U.S. who survived rabies after their nervous system was infected, according to the study.

The new findings should not cause anyone to assume that rabies is less deadly than thought, and proper precautions should still be taken by people who've possibly been exposed, Hirsch said.

Pass it on: Some people living in the remote Amazon may have natural resistance to rabies.