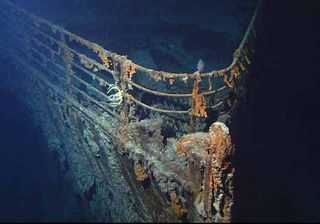 The sinking of the Titanic, where three times more women than men survived, popularized what has now been found to be a myth, that women and children are saved first in shipwrecks.
(Image: © NOAA / Institute for Exploration/University of Rhode Island)

Despite the widespread notion that women and children have a better chance at surviving a shipwreck because they will be saved first, a new study finds that that's just wishful thinking.

The captain, crew and male passengers are more likely to survive maritime disasters than women and children, finds a new study by economists at Uppsala University in Sweden.

When it comes to abandoning ship, "it appears as if it's every man for himself," said lead researcher Mikael Elinder in a statement.

Elinder and his colleague studied 18 shipwrecks, including the Titanic and Lusitania, from 1852 to 2011 that involved more than 15,000 passengers and more than 30 nationalities. They limited their study to disasters that included information on the sex of survivors, that involved at least 100 people, and where at least 5 percent survived and 5 percent died.

But it turns out that this is the exception rather than the rule. Study co-author Oscar Erixson grew up on stories of chivalrous men on the Titanic who gave their lives for the women and children. "[So] the survival patterns we found [in this study] came as surprise to me," the economist wrote in an email to LiveScience. [Gallery: Stunning Shots of the Titanic Shipwreck]

In results published online today (July 30) in the journal Proceedings of the National Academy of Sciences, Erixson and Elinder found that overall, women were about half as likely to survive as men. And they found that crewmembers were about 18.7 percent more likely to survive than passengers, no matter how much time it took a ship to sink.

"The later observation is certainly not what one would expect given that the crew, and the captain in particular, are responsible for evacuating the passengers before putting themselves in safety," Erixson wrote in an email.

The researchers also found that women fared the worst on British ships, despite the fact that more "women and children first" orders were given on British ships than on others.

"Although maritime disasters are tragic events, they can contribute to our understanding of how people behave under extreme stress and when it is a matter of life and death," said Elinder in a statement.